You are using an outdated browser. Please upgrade your browser to improve your experience.
by Christine Chan
April 7, 2017 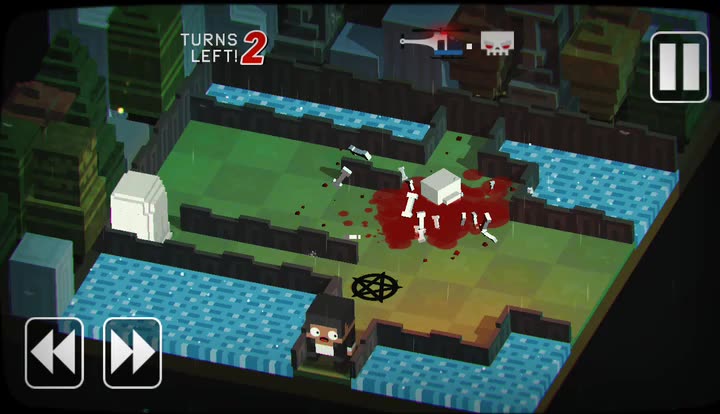 Slayaway Camp ($2.99) by Blue Wizard Digital is a puzzle game with the theme of 80’s horror films. If you love the thrill of a good slasher movie but also have a thing for puzzles, then Slayaway Camp is the perfect mix of the two. The game is brought to you by some of the guys behind classics like Bejeweled and Peggle.

Back in the day, when PopCap still existed as a sole entity, I remember when Bejeweled and Peggle used to be great. However, ever since EA bought them, the quality of their recent releases has gone down, and the more recent versions of Bejeweled Stars, Peggle Blast, and even Plants vs. Zombies 2 became forgettable to me. However, I think it’s amazing that the original guys behind classic puzzle games Bejeweled and Peggle are still out there making games, and Slayaway Camp is the result of this. While I don’t consider myself a horror movie connoisseur, I still enjoy a good horror thriller every so often, especially around Halloween, but Slayaway Camp was too unique to turn down. Since Slayaway Camp comes from some great minds in the industry, it shouldn’t be a surprise that this game does not disappoint. It’s a mobile port of the Steam game (PC and Mac), which is also available for free on Kongregate (with ads). 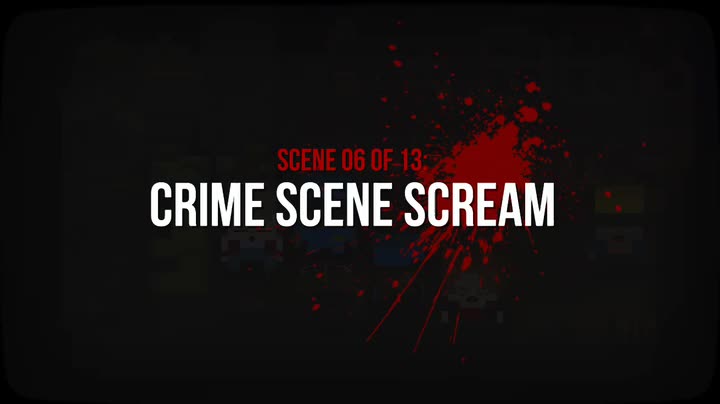 Visually speaking, Slayaway Camp features blocky voxel graphics that are reminiscent of Minecraft and similar games. While some people may be tired of this type of art style, I still enjoy the 3-D pixelated look because it reminds me of the games that I grew up with, except it’s rendered in 3-D. Despite the jagged, blocky aesthetic, Slayaway Camp still packs in an incredible amount of detail, from the textures of the camp environment, to character appearances, to gory kill scenes, and even the lighting and VHS video effects. The color palette used in the game features dark and moody scenarios that are lit up with bright and vibrant colors of campfires and colorful characters that you’re out to get rid of as Skullface. Animations are buttery smooth and fluid in the game, so there was no lag issues on my iPhone 7. The game also has a synth-infused metal soundtrack that fits the mood of the game perfectly, and it’s rather fun to listen to as you play the role of a horror movie killer. The sound effects are akin to what you’d expect in a slasher film and a video store, and the voice acting (Mark Meer from Mass Effect and Derek Mears of Friday the 13th) is superb. For their first game as Blue Wizard Digital, Slayaway Camp features top-notch visual and audio design.

Since Slayaway Camp is still a puzzle game, it’s level-based like many others. However, it does things a bit differently. As Slayaway Camp is themed like 80’s horror movies, the level packs are split up into 11 movie videotapes, and each film features at least a dozen scenes that serve as the puzzles themselves. Every “movie” features a different costume for Skullface, and there are other killers that you can unlock later on as well. Once all of the scenes are completed, the movie is finished and goes on the shelf of the slasher horror collection, but you can replay levels as you desire. The goal of the game is pretty straightforward: kill all of the people in each scenario and then get to the portal to get out of there. While there aren’t any move restrictions on most stages, some do require you to complete them in a certain number of moves, which helps keep things interesting. And if the gratuitous amount of violence and gore is too much for you, then there is an option to turn it down to a PG level, rather than R.

Controls in Slayaway Camp are intuitive and responsive. To make your killer move around, just slide your finger in the direction you want him to go in. He will continue sliding until he hits an obstacle, such as a wall or fence, or even a person. You can also push objects over and crush others with them, such as large bookcases. With this in mind, players will have to plan their moves ahead of time because some scenes have tricky, intricate layouts that will take some skillful maneuvering to get around. We’re talking about six-feet deep holes, bonfires, and cops who are just waiting to bust you. But once you maneuver the killer to a person, you get an optional kill scene that’s pretty fun to watch. Murder scares other people who were adjacent to the victim, so you can use that to your advantage by having them run into holes, fire, or even into the water. If you make a mistake, you can always hit the “rewind” button to undo your last move (all the way back to the beginning if need be). There is also a restart button, and you can “fast forward” through a scene if you are stuck, but hints cost you some shiny gold coins. 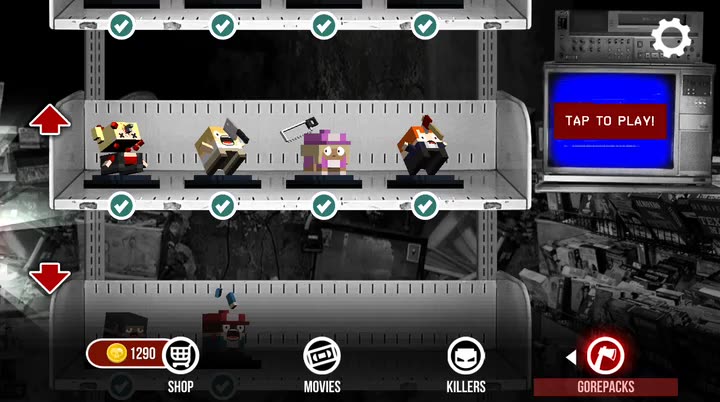 Speaking of coins, after each scene will be a bonus opportunity kill. There will be a bar along the bottom of the screen with a section of it colored red. A marker will move horizontally along the bar and if you tap on the screen while it’s in the red zone, you’ll be awarded with another kill scene and bonus coins. The coins can be spent in the shop for “Gorepacks,” which are basically different ways that your killer will perform the kill scenes. Getting them all will take some time, as they’re all a bit pricey, but at least there’s plenty of chances to get some coins (and no in-app purchases). Another way to spend your coins is by getting the Mystery Box in the “Killers” section, which will get you a random playable killer that you can use. If you’re a horror movie buff, prepare to be delighted as there are some characters that are based on cult classics.

I’ve only just started Slayaway Camp so I’m still in the beginning movies, but man, this game is downright fun. While I’m not a huge horror movie fanatic, the game is still incredibly enjoyable. I love the graphics, the music is amazing, the dialogue for kill scenes is hilarious, the Gorepacks are fun to watch, and the puzzles themselves are challenging. The best thing about the game is the fact that there are no in-app purchases, so even though getting all killers and Gorepacks is expensive, it’s great that you can’t just buy your coins to get them before other people. It keeps players coming back for more gory horror movie fun while earning coins to get optional collectible content. And while I prefer to keep the game in R-mode, it’s nice that they included a less bloody PG-mode to keep even the squeamish satisfied.

I highly recommend Slayaway Camp if you’re a fan of horror and puzzles. You can find Slayaway Camp on the App Store as a universal download for your iPhone and iPad for just $2.99. There are no in-app purchases. 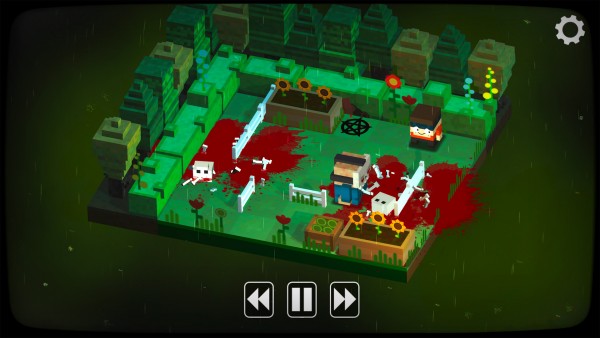 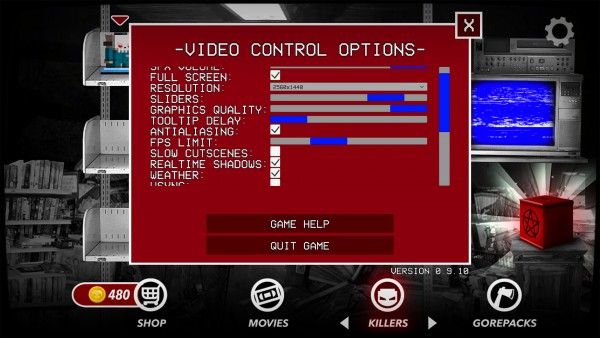 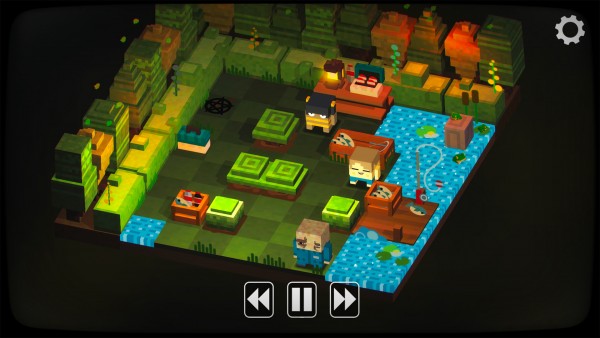 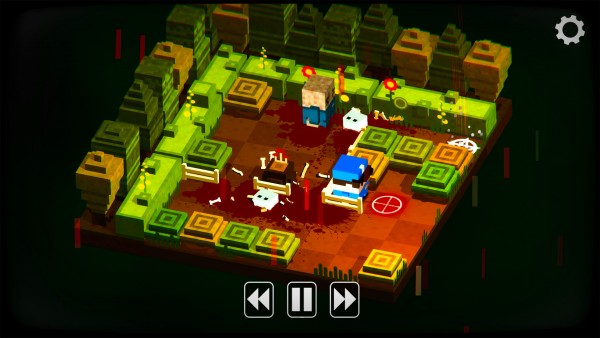 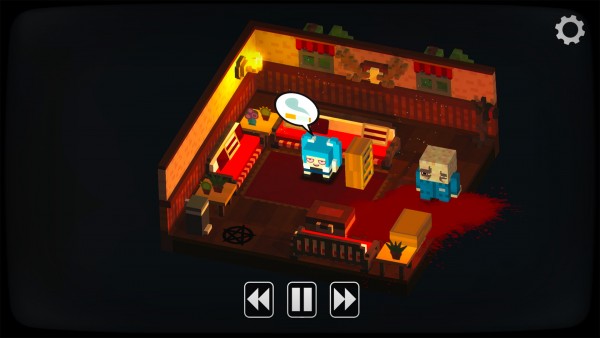 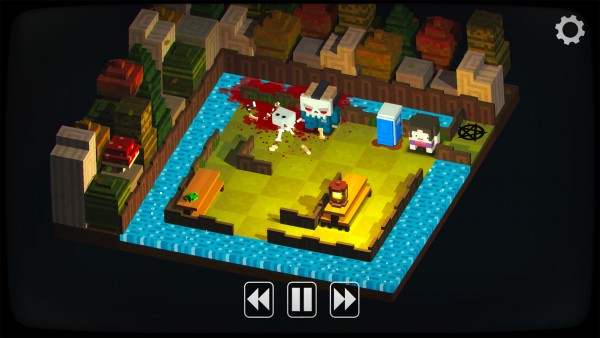 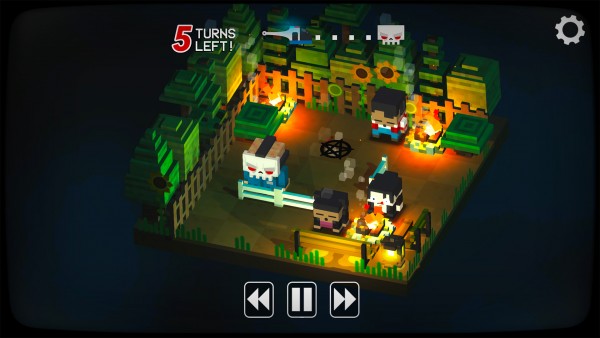 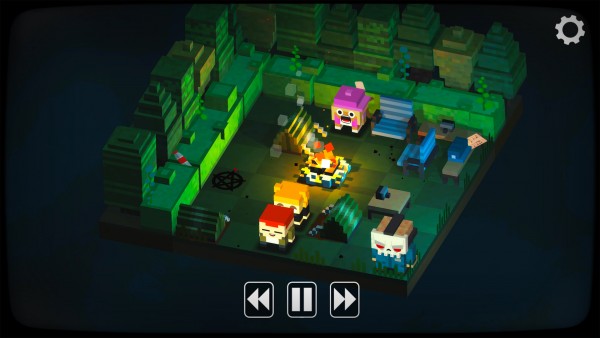 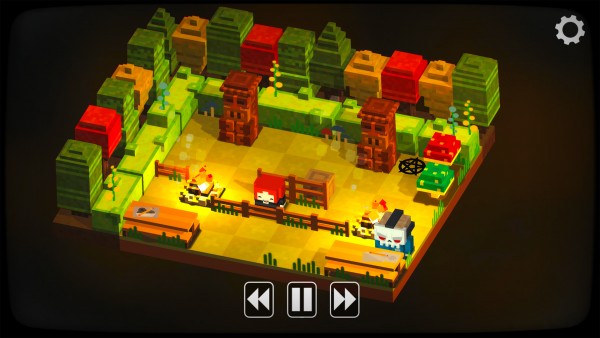 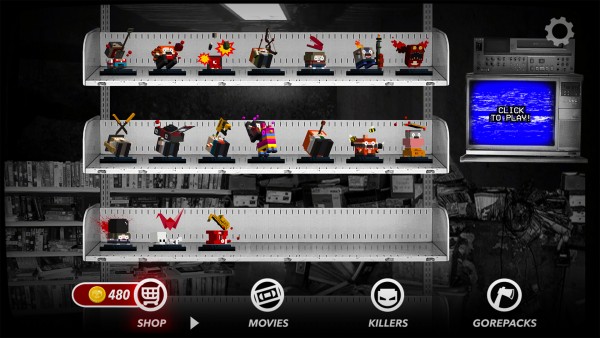 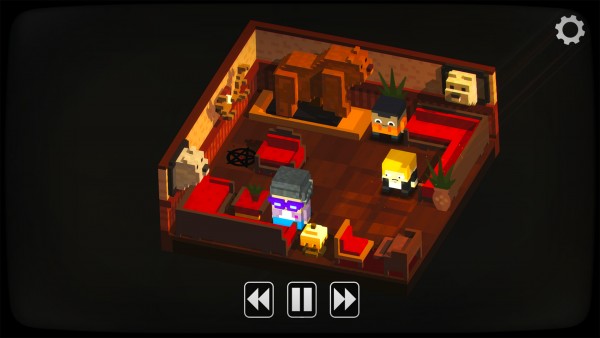 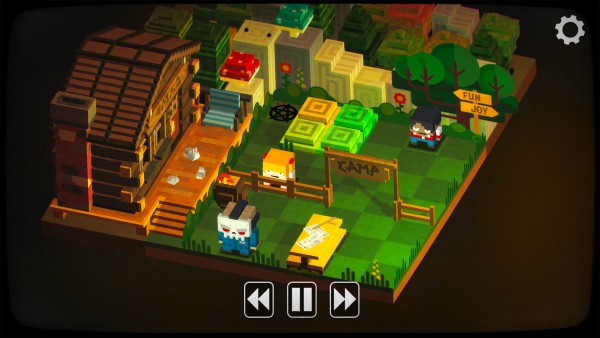