You are using an outdated browser. Please upgrade your browser to improve your experience.
by Joe White
August 7, 2012
Another change made in iOS 6 beta 4 involves the all-new Passbook app, and appears to suggest that Apple will allow for Passbook-compatible third-party iPhone applications once iOS 6 is released in the coming months. Apple released the fourth beta version of iOS 6 to developers yesterday, and changes made involve the YouTube app (which has disappeared), a new safety warning for turn-by-turn navigation in the Maps app, and the appearance of a new "Bluetooth Sharing" option in the Settings application. Now, the Passbook app - which Apple added to the iPhone in iOS 6 beta 1 - has a new "App Store" button, which would suggest that Passbook-compatible third-party applications could be developed once iOS 6 is released to the general public. As 9to5Mac notes of the change:

The Passbook application now has a button that links to the App Store. Presumably, Apple will have a new iOS 6 section that features apps that are powered by Passbook.

In the past, we've speculated as to how Passbook might turn out to be the iOS mobile payments solution iDevice owners have been hoping for. As the sixth-generation iPhone is expected to launch with an NFC chip, folks are guessing that an Apple-developed, Google Wallet-competing service might appear later this year. Until Apple officially launches the sixth-gen iPhone and iOS 6, fans are going to be kept in the dark regarding the ultimate form the company's Passbook app is going to take. Could it be a simple digital store card-holder, or might Passbook - combined with an NFC-powered iPhone - turn into something more? Source: 9to5Mac 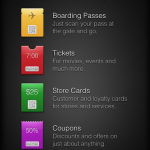 Could Passbook-Compatible iOS Apps Soon Appear In App Store?
Nothing found :(
Try something else