You are using an outdated browser. Please upgrade your browser to improve your experience.
by Aldrin Calimlim
December 16, 2012
So, how great was the impact of the recent native iOS release of Google Maps on iOS 6 adoption? According to Chitika, not great at all. Given the criticism that had befallen Apple's Maps app, it's widely presumed that many users had been holding out on updating to iOS 6, on which the app debuted. Supposedly, these users were not so keen on using Apple's mapping system instead of Google Maps, which it replaced rather unceremoniously. But following the much-awaited return of Google Maps on iOS last Wednesday, Chitika found that only a small percentage of users within its mobile ad network updated to iOS 6. As seen in the graph above provided by Chitika, 72.77 percent of its users were on iOS 6 a few hours prior to the release of Google Maps at around 12 a.m. EST on Dec. 13. By 2:24 p.m. the following day, the number of users of iOS 6 amounted to 72.94 percent. That's a whopping 0.17 percent increase. And by whopping I mean negligible. What gives? As noted by TechCrunch, it could be that most users had already updated to iOS 6 in anticipation of the release of Google Maps. After all, the return of the popular mapping service on iOS was believed to be imminent as early as September. Also, it could very well be that a great deal of users are still not aware of the availability of Google Maps in the App Store. And then there's the matter of the inconclusiveness of the adoption rates of Chitika. Chitika's data takes into account only users of apps within its mobile ad network and consolidates iOS Web traffic from the U.S. and Canada only, so it's hardly definitive in toto. Of course, there's also the likelihood that the presumably widespread holdout on iOS 6 because of Apple Maps' apparent awfulness is just an example of people making a mountain out of a molehill. Source: Chitika Via: TechCrunch 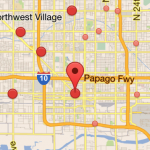 Make Google Maps The Default Maps App With This Jailbreak Tweak
Nothing found :(
Try something else