You are using an outdated browser. Please upgrade your browser to improve your experience.
by Aldrin Calimlim
February 12, 2013
Mere hours after Apple released iOS 6.1.1, the evade3rs team has already updated its popular evasi0n jailbreak for the latest version of iOS. Apple apparently rushed to release iOS 6.1.1 to the public in order to quickly address widespread issues in iOS 6.1, which was released just a few weeks prior. These issues include battery drain, overheating, and syncing problems encountered on different iPhone models. However, it turns out that iOS 6.1.1 has been issued to address a particular issue that can impact cellular performance and reliability for the iPhone 4S. In any case, as a member of the jailbreak community, you might be wondering if iOS 6.1.1 patches the evasi0n jailbreak. Well, the good news is that it doesn't. Just like the beta of iOS 6.1.1 that was seeded to developers last week, the public version of the software is still vulnerable to the jailbreak. The jailbreak has actually been updated to version 1.3 with support for iOS 6.1.1. This new version comes just several days after the release of evasi0n 1.2, which fixed a time zone bug and disabled over-the-air updates. Version 1.1, for its part, fixed a peculiar Weather app bug and an issue concerning reboot times. If you've updated to iOS 6.1.1, you can download evasi0n 1.3. to jailbreak your device. But if you're still on iOS 6.1 but you're not experiencing any problems on your jailbroken device, then you need not update to iOS 6.1.1 and evasi0n 1.3. For more on evasi0n, which has become the fastest-adopted jailbreak method ever, check out AppAdvice's full jailbreak coverage here. Source: evasi0n Via: iDownloadBlog 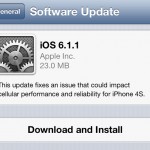 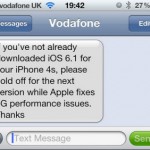 Apple Rushing To Finalize iOS 6.1.1
Nothing found :(
Try something else