You are using an outdated browser. Please upgrade your browser to improve your experience.
by Joe White
October 22, 2013
Here at AppAdvice, we’ve got columns covering the weekly news, the latest iDevice accessories, and apps and products for tech-savvy bookworms. But given that a huge percentage of our daily readers join us from overseas, what about a column dedicated to international news tracking Apple’s work outside of the United States? Look no further: “AppAdvice International,” our brand new weekly column, has you covered.

First up, it’s good news for our international readers as Apple’s iPhone 5s and iPhone 5c are set to launch in an additional 35 countries this week, on Friday, Oct. 25. Apple announced the news back on Oct. 9, explaining that the additional countries include:

However, that’s not all. Apple also confirmed that one week later, on Nov. 1, both handsets will launch in Albania, Armenia, Bahrain, Colombia, El Salvador, Guam, Guatemala, India, Macedonia, Malaysia, Mexico, Moldova, Montenegro, Saudi Arabia, Turkey, and the United Arab Emirates. It’s great to see that despite purported supply concerns, Apple is pushing to bring its popular iPhone 5s (and not so popular Phone 5c) to fans overseas. Though if recent reports are indeed accurate, the Cupertino, Calif. company has increased iPhone 5s production by a massive 75 percent in order to meet ongoing demand for its flagship handset.

The second item in our inaugural agenda concerns Apple’s iPad media event (which is set to begin later today), and when international readers can expect the anticipated new products - an iPad 5 and second-generation iPad mini - to reach them. Of course, nothing has been confirmed by Apple. However, based on the release schedule for the iPhone 5s and iPhone 5c, along with the launch countries for Apple’s previous iPads, we can offer a reasonable guess. The launch countries for Apple’s new handsets, then, included the United States, Australia, Canada, China, France, Germany, Hong Kong, Japan, Puerto Rico, Singapore, and the United Kingdom. It marked the first time that China - the world’s largest smartphone market - received the new flagship iPhone handset on launch day. As such, we’d at least expect a similar selection of international territories to receive Apple’s next-generation iPads the same day as the United States does - a date that could arrive as soon as Oct. 30, according to a recent report. Looking back to last year, an even greater number of countries got the iPad 4 and first-generation iPad mini on Nov. 2, 2012. Included in this selection were Belgium, Denmark, Luxembourg, and the Netherlands, along with many other states which won’t receive the iPhone 5s and iPhone 5c until Apple’s second launch day, on Oct. 25. The iPad 3, on the other hand, launched in a rather smaller selection of countries, including the United Kingdom, France, Germany, and Australia, though one week later a second launch day brought the third-generation iPad to a larger number of international territories. Before this, however, it took a while longer for the original iPad and iPad 2 to reach the United Kingdom, Europe, and Asia - that is, several weeks for the second-generation iDevice, and several months for the first-generation iPad. Fortunately for our international readers, it seems highly unlikely that we’ll see a repeat of this situation. Of course, it’s difficult to ignore reports claiming that the iPad mini 2, due to its anticipated 7.9-inch Retina display, will be in “short supply” later this month. That being said, however, if Apple’s previous product releases are anything to go by, our overseas readers should expect both the iPad 5 and the second-generation iPad mini to be available in a number of international countries come launch day. Territories we’re expecting Apple’s next-generation iPads to launch in first, then, include the United States, Australia, Canada, the United Kingdom, France, Germany, Japan, Hong Kong, and Singapore. Possible additions include Puerto Rico and China. If our predictions - combined with the conclusions drawn in MacG’s aforementioned report - are indeed accurate, international readers in the above countries could see Apple’s new iPads become available by the end of this month, and more precisely, possibly on either Oct. 30 or Oct. 31. We’ll keep you updated with further information, so be sure to check back with us later today.

This past week, Apple also brought its iPhone trade-in program to the United Kingdom, in an effort to increase the number of its smartphones being recycled and reused in the British Isles. In a statement provided to The Telegraph, Apple said:

iPhones hold great value. So, Apple Retail Stores in the UK are launching a new programme to assist customers who wish to bring in their previous-generation iPhone for reuse or recycling. In addition to helping support the environment, customers will be able to receive a credit for their returned phone that they can use toward the purchase of a new iPhone.

Best intentions aside, however, consumers aren’t too pleased with the British iteration of Apple’s iPhone trade-in program. For starters, the value offered by Apple isn’t all that impressive. Depending on the condition of your handset, around £220 is put forward by the iPhone trade-in program, and as British iDevice owners will note, a higher price can be brokered by selling the smartphone through a platform such as eBay (even with the service’s 10 percent fee taken into account). In addition, the cash offered by Apple must be used towards the purchase of a new iPhone handset. Unfortunately for Brits, iPhone trade-in options are indeed somewhat limited, and most people - including myself - turn to the secondary market, and particularly eBay, when it comes to disposing of an old iPhone handset. If early reports are anything to go by, then, it seems that even with Apple’s iPhone trade-in program now available in the United Kingdom, the common preference towards selling online - rather than trading handsets in - is going to remain. Further iPhone trade-in programs in the British Isles are offered by Carphone Warehouse and Mazuma Mobile.

Finally, last week Apple hired a new head of retail, poaching Angela Ahrendts, chief executive officer of the British fashion house Burberry, and announcing that from early next year Ahrendts will take on the newly created role of “Senior Vice President of Retail and Online Stores.” As such, Ahrendts will be leaving London for Cupertino, where she’ll join Apple’s executive team. In a statement, Apple chief executive officer Tim Cook said:

It’s great news that Apple finally has a new retail head in the pipeline, even if Ahrendts isn’t set to reach Cupertino until next year. Apple has been without a retail boss since John Brownett left the company in August 2012. As Cook notes in his statement, Angela Ahrendts indeed has a lot of experience: before joining the London-based Burberry as chief executive officer in 2006, Ahrendts was executive vice president at Liz Claiborne Inc., and previously served as president of Donna Karan International. That’s all for our first AppAdvice International column. Later today, we’ll be bringing you all of the news from Apple’s iPad-themed media event, which kicks off at 10 a.m. PDT (6 p.m. GMT), so be sure to check back with us! AppAdvice International is a weekly column covering Apple’s work outside of the United States. It’s published every Tuesday at 10 a.m. GMT. If you'd like to see a particular news item discussed in next week's column, send an email to: [email protected] See also: Websites Now Activating Safari Push Notifications Ahead Of Mavericks, Hulu Plus Updated With Support For Chromecast On iPhone And iPod touch, and Owl City Multi-Instrumentalist Adam Young Revealed As Creator Of New iOS 7 Sounds. 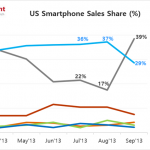 For September, Apple Was The No. 1 US Smartphone Seller 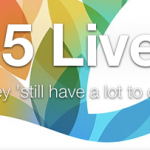 AppAdvice Live From Apple's 2013 iPad Event
Nothing found :(
Try something else