You are using an outdated browser. Please upgrade your browser to improve your experience.
by Joe White
October 16, 2013
Apple has officially confirmed its Oct. 22 iPad event, meaning we're likely to hear more about the Cupertino, Calif. company's new iPads, new Macs, and OS X Mavericks next Tuesday, with releases of the new products presumably planned for soon after. As such, Apple is now asking Mac developers to submit applications optimized for OS X Mavericks, indicating that a release date in the immediate future is indeed in the pipeline. Over at Apple's "News and Announcements" Web page for registered developers, the company explains:

Submit your OS X Mavericks apps today. Make sure your app takes advantage of the great new features in OS X Mavericks when the world's most advanced desktop operating system becomes available to millions of customers later this fall. Download OS X Mavericks GM seed and Xcode 5.0.1 GM seed, now available on the Mac Dev Center. Build your apps with these latest seeds, then test and submit them to the Mac App Store.

Given that Apple requested iOS 7 optimized apps from developers a mere eight days before releasing the software to the general public, it could be that OS X Mavericks reaches the Mac App Store in the days immediately following next week's Oct. 22 event. As a reminder, OS X Mavericks adds a number of new features to Mac computers, many of which have been borrowed from Apple's iOS. These include an iBooks app, a Maps app, iOS-compatible AirDrop, and Safari push notifications. Though pricing for the upcoming software update hasn't been announced, last year OS X Mountain Lion cost just $19.99 in the Mac App Store. As such, Apple is expected to match or even lower this price with OS X Mavericks. We'll keep you updated with further information as we receive it. In the meantime, see: Lost And Found: Search Makes Its Comeback In Official Vimeo App For iPhone, TweetDeck For Mac Updated With New Docked Panel, Inline Reply And Other Features, and Send Money To Your Friends Via Email With Square Cash. 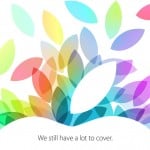 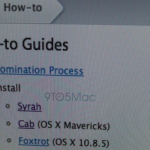 Apple Now Releasing Nightly Builds Of OS X 'Syrah' To Its Employees
Nothing found :(
Try something else