If you’re often sending group messages between friends, family, or professional contacts on your iOS device, one recently updated jailbreak tweak could be of use. MessageRenamer7 adds a pop-up “Rename” option for group messages, and as of its most recent update it plays nice with both iOS 7 and ARM64-devices.

You can pick up the jailbreak tweak for $0.99, and once installed no preferences pane is added to the built-in Settings app, and as you’d expect, no new app icon appears on your iOS device’s Home screen. Rather, the changes made by MessageRenamer7 appear directly in the iOS 7 Messages app itself.

Once downloaded and installed, users of the jailbreak tweak can hold down on a Messages app group message to access a new pop-up menu. Here, three options are available: Rename, Reset, and Cancel. The former allows jailbreakers to choose a new name for the group message, and this can be done using a pop-up text field; the new name should appear immediately, and it’ll look a lot neater than having the usual string of contract names appear in the Messages application.

If you’re not pleased with the new name and want to erase it, Reset allows iOS device users to revert to the original name of their group message. Cancel, on the other hand, closes the pop-up menu without making any changes either way.

It’s definitely a useful feature, and something we’d have expected Apple to implement natively by now. Until that happens, however, MessageRenamer7 can help; you can download the jailbreak tweak for $0.99 in the Cydia Store, and as mentioned, it’s optimized for both iOS 7 and ARM64-iDevices.

For some of our favorite recent additions to the Cydia Store, check our articles on TimePasscode, CloseAll, Mesalation, and StatusModifier.

See also: Season Two Of Netflix’s ‘House of Cards’ Drops Feb. 14, You Must Build A Boat: A Sequel, Of Sorts, To The Mega-Popular 10000000, Pacemaker, The First Spotify-Powered iOS DJ App, Launches In The App Store.

Cydia Tweak: How To Bring The Mac Messages App To Your Non-OS X Desktop Computer 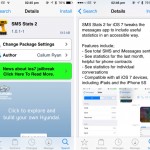 Cydia Tweak: Get Detailed Information On Your Messages App Usage With SMS Stats 2
Nothing found :(
Try something else