You are using an outdated browser. Please upgrade your browser to improve your experience.
by Joe White
December 5, 2013
It's time to take a step back into the classic gaming scene of the 1980s and '90s, because DotEmu has launched its anticipated iOS port of Double Dragon, Double Dragon 2: The Revenge, and Double Dragon 3: Rosetta Stone in the App Store, offering a slice of retro pie for users to enjoy on an iPhone, iPad, or iPod touch. Priced at $2.99, the app, called Double Dragon Trilogy, features all three arcade games in one. In a press release announcing the news, developer DotEmu explains: “Double Dragon Trilogy is a faithful port of all three original arcade games with brand-new features, optimized for mobiles.” In the application's release notes, the developer continues:

A groundbreaking, uber-popular game upon its arcade debut in 1987, Double Dragon is the undisputed godfather of co-op beat ‘em all! Enter Double Dragon Trilogy, a compilation specially optimized for mobiles and which includes all three installments of the beloved arcade series: Double Dragon, Double Dragon 2: The Revenge, and Double Dragon 3: The Rosetta Stone. The first one begins with Billy and his brother Jimmy, two martial arts experts, in a mission to rescue Billy's girlfriend, Marian, who’s been kidnapped by the Black Shadows Gang. All your favorite moves are here: punches, kicks, elbows, knees, head-butts and an assortment of not-exactly-street-legal weapons.

Besides offering iDevice users a faithful port of the original titles, DotEmu also provides a number of enhancements for smartphones and tablets. Here's a list of features, as outlined by the developer: Plus, it's also possible for users of Double Dragon Trilogy to play alongside a friend using Bluetooth, and DotEmu promises that the application will receive an update in the near future adding support for iOS 7 game controllers, a growing number of which are already available to purchase online. As mentioned, Double Dragon Trilogy can be downloaded in the App Store for $2.99, and is optimized for the iPhone, iPad, and iPod touch. Check out the new app, or for more of our recent news, see: Classic B-Movie Gameplay Awaits In Crescent Moon's Clash Of Puppets, Find Treasure, Swashbuckle And Sail The High Seas In Assassin's Creed: Pirates, and Telltale Brings Dark, Gritty The Wolf Among Us To The App Store. [gallery] 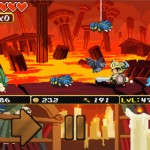 On The Level: Tanuki Entertainment Launches Retro, 16-Bit LvLn In The App Store