You are using an outdated browser. Please upgrade your browser to improve your experience.
by Joe White
April 3, 2014
Update: The update's now live!

IFTTT has announced an update for its iOS app adding support for the iPad, push notifications, and more. The platform links services together using the universal premise of “if this, then that.” To offer our own rendition of the conditional statement: if you’re not already using IFTTT to automate aspects of your daily routine, then you should be.

The update is expected to launch later today. You can pick up the IFTTT iOS application free of charge on the App Store, and the service requires users to sign-up for a free account. Once you’ve done this, the automation can begin: IFTTT supports a huge, growing number of services (known on the platform as “channels”), and two can easily be joined together in order to create a resultant “recipe.”

We’ve talked about IFTTT before, and the app’s last update (which launched in December) brought a much-appreciated iOS location channel to the platform; in the months that followed IFTTT concentrated on integrating a number of popular iOS-connected services, including Netatmo Weather Station, Push.co, Automatic, and Microsoft OneNote, with its system.

Today’s update, however, brings the IFTTT iOS app to Apple’s iPad, allowing users to create, edit, check, delete, and even trigger recipes from the tablet. Plus, universal support for push notifications means users can now get alerted when any particular recipe is activated.

IFTTT has also noted that it’s adding a “Recipes Collection” to its app, which categorizes pre-made recipes together by service or theme.

Personally, I use IFTTT for a number of different tasks, including automating my Instapaper reading list, gaining custom SMS weather alerts, and auto-dimming my MacBook Pro’s screen when I leave the house (a setup that was inspired heavily by this article from Katie Floyd; for my recipe, I used an IFTTT-tagged email in conjunction with an AppleScript Mail app rule).

As mentioned, IFTTT can be downloaded free of charge on the App Store, and it should receive the aforementioned update later today.

In the meantime, see: Audiobus Goes 2.0: Adds Multi-Routing, State Saving And Much More, Op-Ed: What’s To Become Of The Apple TV Now That The Amazon Fire TV Is Here?, and Hungry Like The Wolf For The Wolf Among Us: Episode 3? It’s Coming Next Week. 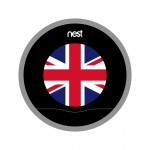 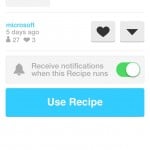 Following Its Launch On The Mac App Store, OneNote Gets Support For IFTTT
Nothing found :(
Try something else