The 88-second teaser for “Episode VII” of the “Star Wars” epic space opera film series was previously announced to be shown only in 30 theaters across the U.S. and Canada beginning Friday morning.

The Force is with you on #BlackFriday when #TheForceAwakens teaser hits @iTunesTrailers.

The teaser is scheduled to be shown in theaters around the world this December. 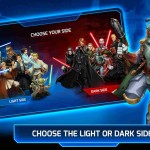