You are using an outdated browser. Please upgrade your browser to improve your experience.
by Christine Chan
March 16, 2017 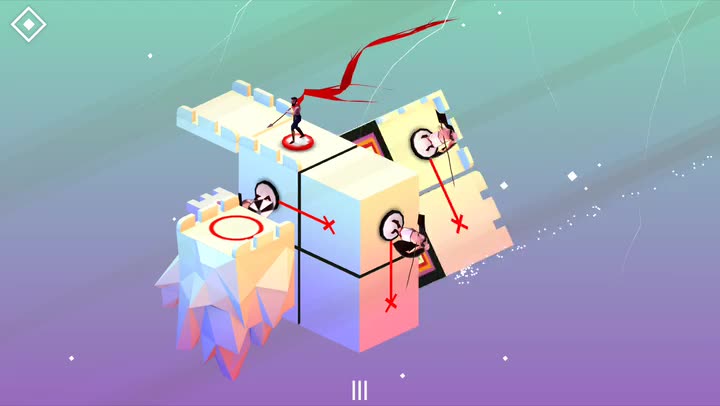 Euclidean Lands ($2.99) by kunabi brother GmbH is a beautiful puzzler from the guys behind Blek that is pretty much what you get if Monument Valley and Hitman GO had a baby together. If that doesn’t get you intrigued on what Euclidean Lands has to offer, then think of other games like After the End: Forsaken Destiny and Causality — if those types of games are what floats your boat, then Euclidean Lands is just another gem that you need in your collection.

These days, while most of my time has been getting poured into The Legend of Zelda: Breath of the Wild on my Nintendo Switch, I like to take a break from exploring the vast map of Hyrule and turn to my iPhone for some quick gaming sessions. As a huge puzzle game fan, Monument Valley has been one of my favorite iOS games of all time, and with good reason too. I also enjoyed the Hitman GO game fairly thoroughly, despite never playing a Hitman game in my life previously. Both of these games were a first of their kind on iOS, so naturally, I have a soft spot in my heart for both of them. So when I saw Euclidean Lands on the App Store, I immediately thought of both of these titles, which proves to be an interesting mashup and something I had to check out for myself. After spending some time with the game, I’m definitely not disappointed. While it is a hybrid of the two games, there’s enough in this game to make it stand up on its own as well. 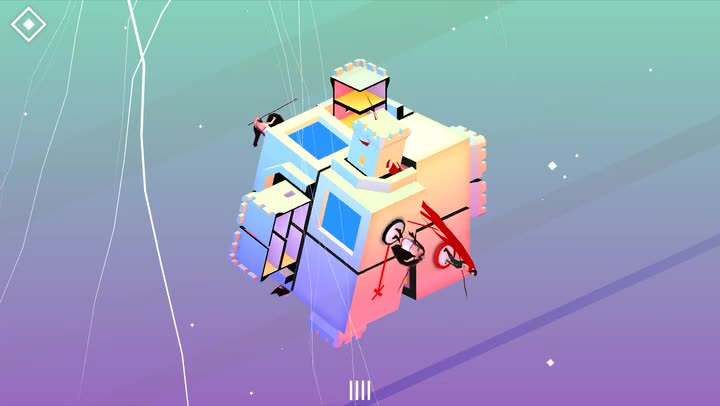 In terms of visuals, Euclidean Lands is downright beautiful with an isometric aesthetic that features cube-like structures that you can swivel and rotate, just like a Rubik’s Cube. Everything is rendered in 3-D and the game is almost like an optical illusion, similar to Monument Valley. However, unlike Monument Valley, your protagonist and all of the enemies that stand in your way are more like chess pieces on the cube, and you must maneuver your character strategically to dispatch your foes without getting killed yourself. The color palette in Euclidean Lands is stunning, as you’ll find various pastel shades and vibrant, bolder hues that combine into a soothing masterpiece. There is also some text in the game levels that provide subtle hints from time to time, and the typography fits in with the isometric style. Animations are smooth and fluid when you move the cube and navigate your character around, and the particle effects that occur when an elimination happens (you or the enemies) is just icing on the cake.

Euclidean Lands’ understated, ambient soundtrack is fairly tranquil and relaxing, which should help you focus on solving the puzzles. The magic behind the game’s audio lies in the sound effects though, which sound like realistic game pieces being moved along stone or some other similar material. Needless to say, kunabi brother GmbH has done an excellent job with Euclidean Lands’ visual and audio design.

Following in similar fashion as other puzzle games, Euclidean Lands is level-based, and players must go through the stages one-by-one in a linear fashion, as levels unlock when you clear the previous one. At the moment, there are five chapters and 40 levels in total. The game does not provide any hints or in-app purchases, so the only way to beat Euclidean Lands is by using your brain. The first several levels start off simple enough, but things get much more intricate and tricky as you progress through the game, though it’s rather gradual and never overwhelming. In fact, it’s important to check the text on a stage if there is any, since they may provide you with hints on what you should be doing in order to complete the level, such as grabbing shields to protect you from frontal attacks. 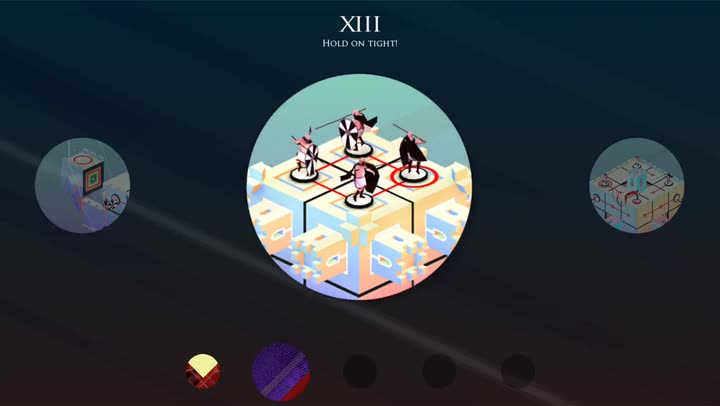 Controls in Euclidean Lands are pretty straightforward and intuitive. The cube mass on each stage can be rotated left and right by dragging your finger around the screen. To rotate the sides or center of the cube (think of a Rubik’s Cube), just touch-and-drag that panel in the direction you want to move it in. Your character can only move one space at a time, and this is done by tapping on the empty square that you want to go to, if it’s accessible. If there’s a wall or some other obstacle, then you won’t be able to move to it. Enemies will occupy squares as well, and the only way to get rid of them is to attack them from the sides or back. If you try to attack them head-on, you’ll die unless you have a shield item, as mentioned earlier. Once all of the enemies are dispatched, then the portal gate opens up (red circle that will glow), and when you reach it, you’ll advance to the next stage, earning up to three medals depending on how well you do. I do wish that it was possible to rotate the cube vertically though, as that would make it easier to see where the enemies are, rather than having to rotate each panel.

To keep things interesting, some enemies have longer attack ranges than others, and you can see how far they can attack due to the red line and “x” marker in front of them. Some may even have shields that protect them, so you have to figure out a way to sneak up on them. Eventually, the cube architectures will begin to morph as you defeat foes, making it harder than it first appeared. There will also be other things like slopes, teleporter squares, and even bosses that start to appear, upping the ante each and every time.

I spent a good chunk of time with Euclidean Lands so far, and while I’m still in the early stages (things get pretty hard!), I’m absolutely loving the game. The graphics are exquisite, the sounds are delightful, and the controls are easy for anyone to learn. While the levels start out basic enough, I love how the difficulty increases on each level until you have something that is so intricate and complex, yet you can’t help but keep playing anyway, even if it will take you a while to figure out the solution. This is a fantastic strategy puzzle that will appeal to anyone who is looking for a challenge. The only improvement that should be made is the ability to rotate the stage vertically, so it would be easier to get a view of what’s to come and plan your method of attack accordingly. Other than that, Euclidean Lands is a solid release and one of the best puzzle games released so far this year, in my opinion.

I highly recommend checking out Euclidean Lands if you’re a fan of puzzles, stealth, and strategy. You can find Euclidean Lands on the App Store as a universal download for your iPhone and iPad for just $2.99. There are no in-app purchases. 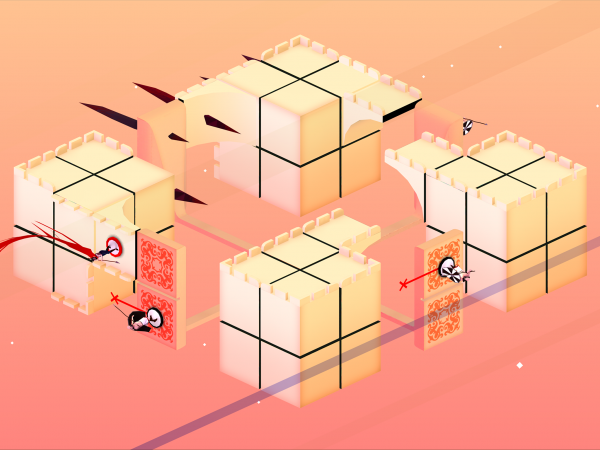 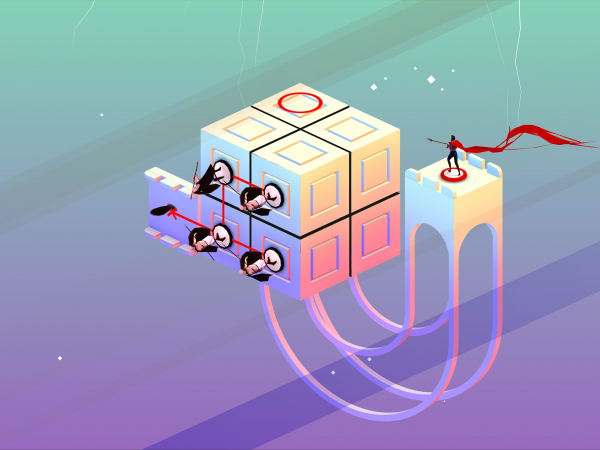 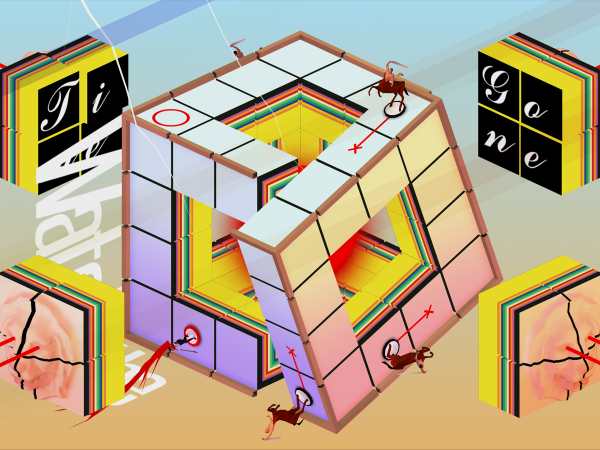 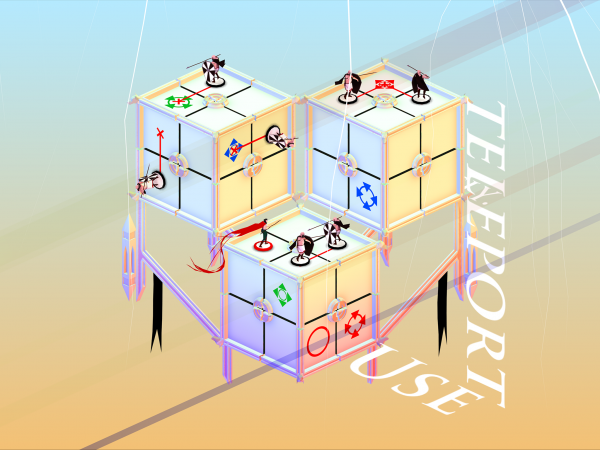 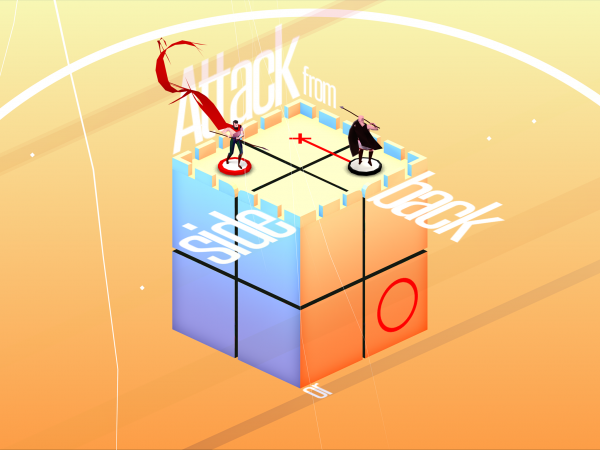 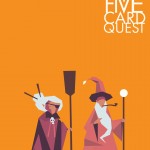 Balance fast-paced gameplay with tactics in Five Card Quest
Nothing found :(
Try something else