First Person Shooting In Your Pocket

As a pretty serious console gamer, I love nothing more than getting my gaming fix on the road. But with so many first person shooter games out there, and such high prices, it can be a risk choosing the right app. I am not claiming these apps are as good as their console siblings, but for portable games, they are amazing. This AppGuide will show you our favorite iOS first person shooter games.

Modern Combat 4 is the most complete first person shooter experience on iOS at the moment. The game features a decent single player campaign with an engaging storyline as well as an online multiplayer mode which gives Modern Combat great replayability value. The online multiplayer allows you to upgrade your weapons and participate in multiple game modes with classics like Capture the Flag and Deathmatch as well as unique new ones like Demolition. Gameloft is also continually adding new features to Modern Combat; it was recently updated with new maps and multiplayer modes.

Inspired by Valve's popular game Team Fortress 2, Blitz Brigade manages to pull off the same fantastic multiplayer experience on iOS. The game features two teams: one representing good, the other evil, each with characters that have unique abilities. You can choose to be your team's sniper, machine gunner, spy, medic, or soldier. Each character has his or her own special abilities which you will have to utilize well to beat other players. The game lets you play with up to 12 people online. There are over a hundred weapons to be unlocked and several vehicles that you can drive around. Blitz Brigade also includes an offline training mode with several missions for you to master your skills. This game is a great way to kill some time and offers a very enjoyable online shooter experience.

If modern shooters aren't your thing, then Gameloft's got you covered with their sci-fi first person shooter, NOVA 3. While some may argue that all Gameloft has done here is put a new "skin" on top of Modern Combat, NOVA 3 does offer a different story, great alien weapons and vehicles, and an immersive 12 player online multiplayer mode. If you've played previous NOVA titles such as NOVA 2, you should notice gameplay and graphical improvements. There are always quite a few people playing online, so it is a good way to pass the time. NOVA 3 is the closest you will get to a classy shooter like Halo on the iPhone. 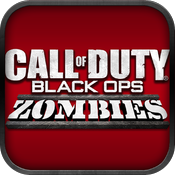 I’m primarily a console/PC gamer, but I like to get my fix on the move. Obviously I’m not expecting the graphics and content I get on my consoles, but Blacks Ops Zombies does fill the gap for when I’m stuck in work, on the train, or even just wanting a change from big screen gaming. Overall, graphics are good as is content, and those used to playing Black Ops on a console/PC will feel right at home straight away. 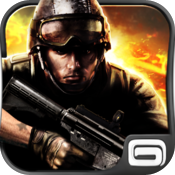 Even though Modern Combat 4 is featured in this guide, Modern Combat 3 set such a high benchmark for first person shooters on iOS. Gameloft has excelled in showing what iPhones can really do. You can play this games campaign mode to follow previous Modern Combat stories. The game also works a lot better on older devices. 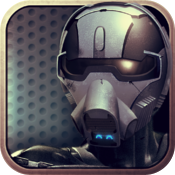 One problem with a lot of iOS games is that they don’t allow multiplayer over 3G and are only playable over our Wi-Fi connections. But Archetype changes this and will allow you to play via Wi-Fi, 3G, or even Edge. Gameplay and controls are both good, and the best thing is the price. Archetype is only $0.99; we think it's a bargain.

Most of the other games in this AppGuide are paid, so I found you a free FPS for your enjoyment! Although this isn’t the typical FPS where you move around, it is still perfectly fun, and in fact it is rather addictive. All you need to do is move your crosshair and shoot, no moving or jumping over obstacles. You get single and multiplayer modes and for the free price tag, Overkill is awesome!

Rage takes a different approach than the rest of the games we see here. RAGE does all the walking for you! You just aim and shoot. But don’t let that put you off, gameplay is still quite challenging and just as involving as other games in the FPS category. RAGE caters for those who are up for a little FPS game, but don't want to be fiddling with the dual touch analogs all day.

As I’m still highly anticipating a better Battlefield release than EA’s last attempt with Battlefield 3: Aftershock, Battlefield 2 is probably one of the most played FPS games on my iPhone. As a massive FPS fan, I appreciate that I can drive tanks and pilot helicopters. The controls are not so intuitive, so they do need some getting used to, but overall Battlefield 2 is awesome.

I remember playing this back in the day, and I loved it! Doom has now made its way to iOS and nothing has changed about how I feel about this game. Even though I’m used to playing it on a PS3, nothing can take away the fun factor away from Doom Classic.

Dead Trigger is a survival first person shooter experience on iOS. The game features stunning graphics that offer a very immersive experience. The objective of the game is to survive hordes of zombies or stay alive for a specific amount of time. While the game is a great five minute fix, it can become extremely repetitive. Furthermore, at times you will feel like you need to spend money to progress but if you play carefully you can get through the missions without doing so. The annoying freemium model around the game is why the game drops to a Decent mention in this guide.