Out of the huge number of piano apps available Pianist Pro has the essential features that make a piano app on the iPad simply amazing. One of the coolest features is the wireless MIDI support this enables a musician to use an iPad as an input device in professional notation software such as Finale or Sibelius as well as other audio software on desktop OS machines. Pianist Pro has practice and performing tools that make playing by yourself not a bad thing. The interface is dead simple, the feature set rich making this the essential piano app for the iPad. (Reviewed at version 1.2) For a great playing experience grab Pro Keys. This app offers around twenty different instruments including a favorite called "Blade Runner," this instrument emulates the sound you heard in Ridley Scott's film, "Blade Runner," and it is simply great to be able to create your own Blade Runner soundtrack with Pro Keys. Pro Keys fails to be the essential app because although it offers a great playing experience it lacks the great number of features Pianist Pro offers. (Reviewed at version 1.6)

In direct competition with Pro Keys is Synth. It features around twenty instruments as well and arranges those instruments by lead, bass, fx, pad, drum, or sampler instruments. The interface is very good. The reason I prefer Pro Keys to Synth is the ability to play two keyboards at once with Pro Keys. A very notable and well made app but it simply does not compete with Pianist Pro in the feature set and offers good competition for Pro Keys. (Reviewed at version 2.0)

If playing duets is all that you want in an app this app may be for you. Upon launch you have two keyboards and the ability to flip one of them over. The result is two people can play at the same time. Two features remain in this app; octave changing and note highlighting. The first is common in many apps, the second is a cool feature that allows during duets to let your partner know which note you just played by highlighting it on their piano. The app is very simple and has many features making it a decent app but not great. (Reviewed at version 1.0.1) 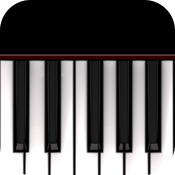