5 Soundboard Apps To Annoy Anyone

The App Store is full of ingenious, innovative apps designed to take your iPhone, iPad, or iPod to new heights of productivity, creativity, and design. But what if you're goal is to just annoy the socks of the guy in the next cubicle? Need some Mother-in-Law kryptonite? Want to be sure you ride the elevator alone? Need some audio ammunition for the guy in the bathroom stall next to you? Some of the best tools of annoyance in the App Store are Soundboard Apps. I'm not saying that Soundboards can't be entertaining, they certainly are! But, intentional overuse around people you don't like is one of the most entertaining ways to use them! Here's five Soundboards that you can use to annoy anyone.

Dapper Gentlemen got this one right with this iPad Soundboard offering. It's what you would expect from an iPad app with big bright colors and super simple UI. As you launch Dapper Soundboard HD, your iPad is filled with frames of pictures that illustrate the sound you'll hear. Simply touch the frame and a clear sound is heard. With over 55 sounds, you're sure to find just the right sound to play over and over again to annoy anyone in the room. It's a great soundboard considering it's free and in HD for the iPad. Sounds include the usual burp, fart, scream, explosion, etc. But some of the most realistic are a crying baby, a church bell, a dot matrix printer, doorbell, and crickets. Just trying this app out for the first time, my wife came running in the room when she heard a baby crying. It's that good!

Whether you've seen the movie or not, this free app is worth a try not only because of it's soundboard, but it actually has a bomb defuser game, photo slide show, and wall papers... all from the MacGruber movie of course. I know, it's a shameless movie promo app, but this one is actually quite funny. Even if you haven't made it out to see MacGruber yet, you should get a kick out of some of the quotes from the soundboard. It's available in HD for iPad or SD for iPhone. In true SNL fashion, some of the quotes are crude. But you said you wanted some Mother-in-Law kryptonite, right? Just let her hear MacGruber say over and over again, "Did I remember to tell you how ugly I think you are?" or "Things are going to get real smelly here later on!", and she'll be packing before you know it!

Picture yourself for a moment in a public restroom stall. You can't help but notice someone has chosen to occupy the stall right next to yours! You can tell by the gigantic size 13's that you're in for a toxic overflow! Quickly launch iSounds Sci-Fi HD on your iPad or the SD version on your iPhone (I know I'm not the only one who takes them in the bathroom with me) and try this sequence of realistic Sci-Fi sounds: Computer voice "Please Log In"... "Missiles Launched"... then a few laser sounds, a few meter impacts... then "Please Evacuate Immediately"... and finish it off with an alarm or two and "Mission Complete". Each sound is brilliantly clear and has the realistic Sci-Fi movie sound. If your next stall neighbor doesn't leave right away, you can always use the hovering UFO sound, step up on the toilet and make him think you've been beamed up! 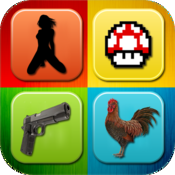 If you're looking for an iPhone soundboard that's customizable and always adding new sounds via in-app download, Custom Soundboard's the app for you. What I liked best about this app is it's kind of like "Ambiance meets Annoyance". You'll be able to download more than just the gunshot, or belch sound. They've actually got funny quotes from movies like Anchorman and Borat, and everyone's favorite Animated TV Families, the Simpson's and Griffin's. The ability to pick and choose sounds for a customizable experience is what sets this soundboard apart from even many paid apps. Oh, did I forget to mention that? This one's FREE!

OK, you want fart sounds? Who doesn't? There's 36 different fart sounds in this iPad Fart Works app. All appropriately named with descriptive titles. Though the sounds aren't quite what you may be used to, and there's no real customization like iFart, what sets this app apart is the ability to slide your finger across the iPad screen and hear a series of different fart sounds all at once. Not sure this is exactly what Apple intended for the multi-touch iPad design, but for a fart sound app, it's pretty effective, especially in church! (I didn't suggest it... I'm just saying).