Doodle games have become frighteningly popular on the App Store thanks to their simplicity, ease of use, and fun factor. As doodlers and doodle games become more and more sophisticated, creative, and intricate, there are those that remain simple and irresistible based on long-standing traditional sports. Here are just a few sports games that doodle fans should have in their doodle arsenal. 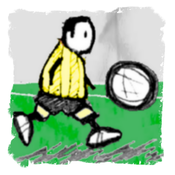 The international soccer (or Football) sport phenomenon is well represented in the App Store with plenty of titles to choose from, but this one is a standout due to it’s simplicity, amusing animations, authentic sounds, and addictive game play. With a little practice you’ll be scoring, blocking, and cheering in a soccer game that competes with any in the App Store. With three difficulty settings, fantastic, colorful artwork, and only .99 cents, grab this title and enjoy some soccer, doodle style!

When I was young I would go and watch my dad bowl every Wednesday night for his bowling league. One night he bowled a 299 and became the superstar of the bowling alley. He taught me how to bowl, but I never matched my dad’s bowling status, despite the many lessons. Well, now I can become that bowling champ in a different way: with doodle bowling on the iPad! The game features 13 different themed backgrounds, 3D physics, online leaderboards, and Facebook integration. Forget that heavy, cumbersome ball.

As far as I can tell, there isn’t a real game of doodle hockey yet in the App Store, so this will have to do. And do it does. Air Hockey doesn’t involve intricate play books, body checks, and missing teeth (thank goodness), but it does involve suspense, strategy, and a lot of fun. Air Hockey was practically invented for doodle graphics, and this is one of the better ones. With six difficulty stings, multiple pucks, cool doodle graphics, and special doodle effects like flame and smoke trails, Doodle Hockey is a good pick up and play sports title.

I think I’m the only person I know who hates golf. I hate to watch it, I hate to play it, I hate hearing other people talk about it. Golf video games are a different story, however. There’s nothing better than chilling with a well-made golf title in a well air-conditioned buddy’s house with a well-stocked refrigerator. Let’s face it: Doodle Golf won’t blow your mind if your used to playing Tiger Woods on the PS3 or Xbox 360. What it does offer is a fun line-drawing golf game that will have you golfing around doodles. Backgrounds range from Legos and sea creatures to cobblestone roads and sky doodles. There are four difficulty levels, fifty courses, and fifty medals. At .99 cents you really should check it out. Have you played iFishing and other realistic fishing games but are looking for something different? Try Doodle Fishing. It’s everything you expect from a fishing title, drawn in doodles. In fact, it’s a cartoon expansion of iFishing, so if you like that game chances are good you’ll dig this doodle version. Trophy rooms, tournaments, fifteen lakes to unlock, advanced fish AI, and a lot more make this one of the most complete fishing games in the App Store, doodle or otherwise.

This is a brand new game sure to be popular with any doodle or pool fans. The only game of it’s kind, Doodle Pool features three game types including 8-ball, 8-ball UK, and 9-ball, eight AI opponents to beat with various difficulty, cartoon sound effects, and a time attack mode. Doodle Pool comes complete with good shooting mechanics and Open Feint achievements. Rack ‘em and crack ‘em!

Skiing at it’s doodliest. Doodle Ski is a never-ending style of game that has you skiing down hills and running into bad guys like angry penguins, angry yetis, alien attacks, avalanches, rockslides, and fog. To stave off attacks from the angry baddies, chuck your everyday packed ball of snow, otherwise known as snowballs. With tilt controls in tow, Doodle Ski will keep you busy–at least until the resorts open.

Here is a relatively new app that is actually two apps. DoodleDart – Dartboard is made for the iPad, and DoodleDart – Darts is made for the iPhone or iPod Touch. Download both apps and you have a complete game of darts. Use your iPhone or iPod Touch to “throw” the darts to the dartboard on your iPad via Bluetooth. It’s a neat idea that younger players can enjoy. It features multiplayer, wacky sound effects, and an incredible art style.The Dartboard is $2.99, and the darts for the iPhone and iPod Touch are free.

I don’t know how “traditional” a sport shuffle board is, but it makes my list because of it’s fun and addicting pacing and good physics. Have a go in single or double player battle mode. Some features include three difficulty levels, a CPU color setting, pack size, and a sound toggle. It’s a bit pricey at $1.99, but it will have you addicted in no time.