For kids who have outgrown kiddie apps but aren’t quite ready for hard-core teen/adult gaming, these games are just plain fun. Most of these apps offer a free, lite version as well, so there’s no reason not to try them out and see if the full versions will be worthwhile.

Launch ragdolls out of cannons at targets such as superhammers, moving asteroids, and much more in this popular physics-based puzzle game. Over 100 progressively more challenging brain-tingling levels for you to enjoy. Try out the first 18 levels for free in Ragdoll Blaster Lite.

This game brings the arcade onto your iPhone or iPod Touch with a fun mixture of skeeballing and redeeming your tickets for virtual prizes like candy, lava lamps, and more. You can put some spin on your ball by tilting your device. Earn achievements and compete for global high scores. 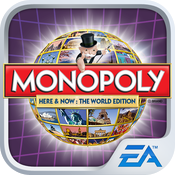 Love the classic board game Monopoly but don’t always have a large enough group to play? Well, now you can play with one or more friends or play by yourself. Buy, sell, auction and trade properties. Fun animation adds a little kick to the game. In this version, you can own properties around the world! For more traditional fun, you can download regular Monopoly as well.

Have your own adventure on Pandora, a planet unlike anything on earth. You will find wondrous plants and animals -- some will try to do you harm while others will help you on your journey. Become a part of the Na’vi culture and stop the Sky People from destroying beautiful Pandora. Try the first two challenges in the free lite version.

Become Homer Simpson and fight Mr. Burns and his league of villains. Keep Springfield safe and win the doughnuts! You get weapons like a taser, a giant hammer, a stick of uranium and many, many more. Marge, Bart, Lisa, and Maggie are your allies. Familiar characters from the show will pop up throughout the game’s 25 levels. The free version contains the first level of the game.

You ARE a God. There are infinite ways to use your magical powers to control the island residents. Feed them to sharks, dinosaurs, or giant spiders. Turn them into dancing zombies. Zap them with lightning. Or, show your benevolence by helping them obtain food. You can launch them into the sky like in the apps Papi Jump and Doodle Jump, or plunge them into the molten core of the earth and play a Canabalt-like game avoiding obstacles. Open Feint features allow you to compare scores with friends and people around the world.

Playing Sneezies takes skill, planning, and a little bit of dumb luck. The objective of this app is to set off a chain reaction and detonate all of the Sneezies. It’s fun to see your screen blow up in a frenzy of pollen. You can play up to 60 levels. Compare scores with players around the world. Sneezies Lite has 8 levels for you to try.

As you race to the finish line you must use ramps, acceleration arrows, loop-de-loops, and more to rocket your car to the flag. You get 25 tracks to start. To make the game even better you can download new tracks created by people in the online community or create some yourself! Also try chalkboard stunts pro for extra goodies such as tilt control.

This air attack app is hard to put down once you start. You will keep wanting to get to the next level or unlock the next plane. MiniSquadron also looks appealing with the clever backdrop designs, paint jobs, and the flashy weapons. This is fast-paced, edge-of-your-seat dogfighting without the gore you see in some games.

This backyard basketball game will not be mistaken for an NBA game. With a wide variety of teams to choose from you can start your own league or play an exhibition match between your favorite characters. Funky Hoops has a totally freestyle vibe and is just plain fun. Check out Funky Hoops Lite for a scaled down version.

War Evolved puts weapons from many eras together in a battle that tests your ability to deal with constant game-changers. From cavemen throwing rocks to Jeeps with machine guns; from medieval times to the future with flying vehicles, you never know what to expect. You can play online against other people if you wish. If you enjoy warfare tactics, this is the game for you. Get a free taste with War Evolved Lite. 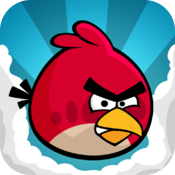 Angry birds wreak revenge on the evil green pigs who try to steal their eggs. The green pigs have elaborate defensive castles you must destroy. Slingshot your birds as they explode, divide into three, drop eggs, and more. It’s an adventure game with multiple levels (over 135) and achievement to add to the challenge. Try out the first dozen or so levels with Angry Birds Lite. 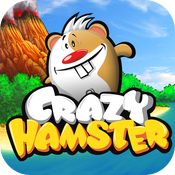 Help this crazy hamster on his quest to find food before the harsh winter. Find fruit while avoiding bear traps, fires, and more. You get tools to deal with obstacles; for example, a trampoline and hair dryer will help you jump over big ditches. But hurry before time runs out! Try out a few levels for free with the Crazy Hamster LITE.

Fruit Ninja is a wildly popular app and there is no question why. It has created a whole new definition for iPhone and iPad gaming. The basic idea is that fruit glides on to the screen in groups along with bombs. Slice the fruit, avoid the bombs, and get multiple fruit in the same slice for extra combo points. You can challenge your friends on Gamecenter. Juicy and satisfying, this game is hard to put down. Check out the lite version for a sample.

Cut the Rope is another massively popular app and one of the few apps to beat Angry Birds in 2010 for the number one spot in the App Store. The gist of this game is you try to feed candy to an adorable monster. The candy is attached to rope(s) that you must cut so that the candy can drop into the monster’s mouth. Avoid obstacles like spiders, electric beams, metal blocks, and more. Each level brings more twists, so you never get bored. This app has a lite version as well.

This is my tween son’s absolute favorite racing game series, and I think he’s tried them all. It’s hard to decide what puts it above the others: great graphics, exotic maps from around the world, or the pleasure of using a “boost” to pull off an exciting last second win. Complete the task given in the race (collect x amount of money, finish in the top 3, etc.) to unlock new cars, accessories, and more. Great gameplay and excellent user interface make this series a winner, and the latest installment is no exception.