With the popularity of the online show Tabletop, board games are enjoying a resurgence. Instead of gathering around cardboard, why not use your iPad? Many of the most popular and classic board games are available as apps on your iPad. Plus, an iPad app removes the need to set up and clean up a board, and makes it impossible to lose any pieces! The best apps recreate both the gameplay and the social component of the physical board game (so we have excluded apps that rely only on “pass and play” multiplayer). This AppList will walk you through the best apps to load during your next gathering of family and friends.

A great place to start with iPad board games is with a multi-game app like GameRoom. The app allows players to choose from checkers, reversi, halma, go, mancala, tafl, atari go, and cups. Or, you can create a custom board. GameRoom doesn’t have flashy graphics, but it is a stylish app that has everything you need to play the games you remember. It even has a few smart options and well written rules for each game. The only feature GameRoom is missing is the ability to play a single player game against a computer opponent.

Monopoly is the quintessential board game for many people, and they won’t be disappointed by the Monopoly app. Monopoly for iPad faithfully recreates the beloved game, with only stylistic deviations. The added animations, however, don’t detract from the app’s clear goal to preserve what fans love about the game. Still, the game itself is somehow less engaging when you aren’t moving pieces or counting money. Even so, Monopoly is an essential app in any board game aficionado’s iPad arsenal.

If you prefer word games, you probably love Boggle. The traditional box with letter blocks has been translated to the iPad as faithfully as possible. In fact, Boggle for iPad offers more value than the physical version, because it has three game modes. You can play solo, pass and play, or in a “self score” mode. Self score best replicates the “classic” game: the iPad serves as the central letter box and players gather around and simultaneously write down the words they find. 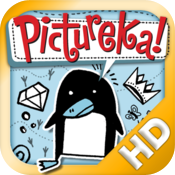 If you’re in the mood for a more recent classic, Pictureka! is a great choice. For the unfamiliar, Pictureka! is a hidden object game in which players alternate turns trying to find specific objects in a large jumble of objects before the time runs out. The game is fast-paced, uses stylized art that resembles a Tim Burton movie, and seems designed to make players feel slightly uncomfortable. The controls are fluid and responsive, and the app has single and multiplayer options. More importantly, Pictureka! feels like it was created for the iPad, not kludged to work with a touch screen interface. 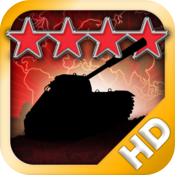 RISK™: The Official Game for iPad

Risk is another old favorite faithfully brought to the iPad in a well-designed app. In Risk, players take turns moving armies and attacking opponents to conquer the world. The app has three modes: single player, pass and play, and local play. Pass and Play mode is the classic game, and despite the title can easily be played with players gathered around the iPad. The app adds animated troop movements and fights, which make the game more lively.

Even though Blokus’ physical board game isn’t as much of a household name, it deserves a spot on your iPad. Blokus HD should appeal to fans of logic puzzles, because it resembles multiplayer Tetris. Each of the four players start with 21 Tetris-shaped blocks of a single color that they must place on the board (or iPad). The difficulty and strategy comes in with the rule that each block you place can only touch a corner of one of your other blocks, but may touch any part of an opposing player’s blocks. Interestingly, the iPad version of Blokus has some features that may even make it superior to the physical board game. Specifically, Blokus has a “color blind” mode that adds a shape to each player’s designated color, and the board highlights legal moves for your turn and will not allow illegal moves. Thus, Blokus is a fun app that loses nothing from its traditional version. 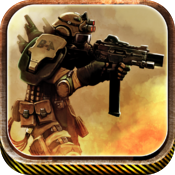 Sometimes you need a game that’s just about the battle, and that’s where Neuroshima Hex shines. Neuroshima Hex is essentially a strategic, bloody, board game version of capture the flag. A maximum of four players alternate turns placing tiles with troops or other battle-appropriate gear on the board to simultaneously protect their headquarters and damage another player’s headquarters. The game includes simulated battles, and is more complex than it appears at first blush. Newbies to “hard core” board games might appreciate Neuroshima Hex’s excellent tutorial and attempts to include a post-apocalyptic story. Everyone, however, should be pleased with the game designers’ implementation of a single screen gameboard and refreshingly few animations.

If you want a game with a little more strategy and little less bloodshed, try Caylus. In the classic Eurogame, players are competing to build up a settlement and win favor with the king. The gameplay involves strategically managing resources and workers to earn prestige and keep your opponents from earning prestige. You can play a solo game, an online game, or a local game with up to five players. Caylus is a polished recreation of the physical game, with retina graphics and a very comprehensive in-game help section. Although it may seem daunting at first, Caylus is worth the effort to master. 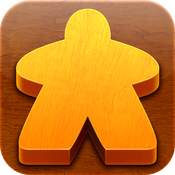 For more of a challenge, you can try Carcassone, one of the most famous “Euro Boardgames.” The app version has single and multiplayer modes (up to five players) that should be enjoyable for the unfamiliar as well as fans of the physical game. The gameplay is relatively straightforward, in that players take turns placing tiles on a board to eventually create a map of cities, roads, and other structures. Carcassone is beautifully translated to the iPad, and supports endless replaying as you learn the depth and complexity of the possible strategies.