Movies have spawned some of great games for the iPhone.

Movie Game Apps For The iPhone

Movies have spawned some of great games for the iPhone. We take a look at some of the well-known and some of the hidden gem movie apps in this AppList. As always let us know if we left off your favorite movie game app.

The Terminator franchise is a favorite amongst many. Terminator Salvation is a must-have for Terminator fans. The only big flaw is the limited gameplay. We were able to get through the entire game in all three difficulties in a single night. The gameplay that is there is tons of fun and of great quality. Terminator fans should download this one today.

How to Train Your Dragon: Flight of the Night Fury

While How To Train Your Dragon may not be a classic like Terminator, it is a fantastic relatively new movie. If you have ever dreamed of flying a dragon? Well, now you can. The game lets you fly around and explore the Island of Berk. There are a few different challenges. The game does not have endless content and will not keep you entertained for long. The graphics could also be greatly improved. The gameplay that is included is fun, but short.

Scott Pilgrim may not be a classic quite yet, it is a fantastic movie. Pilgrim’s Punch-Out is a free game. The graphics and gameplay are very retro. The feel of the game harkens back to the Nintendo Entertainment System days. The app runs great on the iPhone and the iPad. The gameplay is fun; basically you punch out different characters from the movie. Movie trailers are also included in the app. A great free app that everyone should have.

The Karate Kid has been around for decades. Sony has introduced a free game to help promote the contemporary version of “The Karate Kid”. The game offers five different martial arts exercises. As you get better, you are able to advance through the belts. The graphics and game itself are of great quality. It is a fun game that should keep you entertained for hours on end.

Have you ever dreamed of solving mysteries like Sherlock Holmes? Sherlock Holmes Mysteries by Warner Brothers is a nice low cost game that makes you think. The problem that is a common theme with movie apps is a lack of content. Warner Brothers needs to add some more cases to increase replay value. The game is not just about cases. A new boxing mode has been included as an in-app purchase. Fans of Sherlock Holmes will want to check this one out. It is also available as a separate app for the iPad.

Paramount Pictures has released a great companion app to the movie, “School of Rock”. The game lets you play along with classic rock songs, your own library and even test your rock knowledge with trivia. You can play not only as the guitar, but also drums, keyboards, or the bass. The app is in-depth enough and engaging enough to make it worth your time. 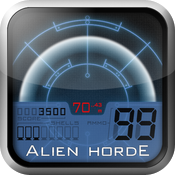 Track those blasted aliens with Alien Horde. Alien Horde is a game that models itself after the motion tracking device found in the Ridley Scott film, “Alien”. The game is not authorized by 20th Century fox. Alien fans are still waiting for official games from Fox. In the game you simply track aliens that show up on screen and shoot them. It is a very simple game, but tons of fun. Alien fans should rush out to get this motion tracking game.

Indiana Jones and the Lost Puzzles

Indiana Jones and the Lost Puzzles is a puzzle adventure game that takes place in the Indiana Jones universe. THQ packs in a ton of different puzzles. The puzzles require you to match up colors to make strings of colors. You must also avoid the snakes and collect power ups. These power ups include the Holy Grail and the Arc of the Covenant. Three game modes are included, which increase replay value. Indiana Jones’ fans should enjoy this simple game from THQ Wireless. 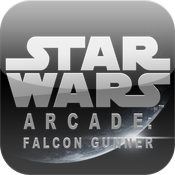 What movie list would be complete without mention of the venerable Star Wars franchise? Star Wars Falcon Gunner puts you into the cockpit of the Millennium Falcon. Spin around to move your gun. Your mission is to keep your ship safe and destroy the enemy fighters. What could be more Star Wars like than this? A must have for movie addicts and game addicts alike.