Games to Play With Friends

iOS 3.0 brought P2P gaming to iOS, letting you play against your friends over Bluetooth or WiFi. Here are some of the best apps that take advantage of that capability.

Fans of the Assassin's Creed franchise will enjoy this game. The premise is similar to the multiplayer Assassin's Creed Brotherhood: assassinate your target and blend into the crowd. This app lets you play against up to 3 other people over WiFi. You can play against your friends too by inviting them into your game session. With multiple environments, power-ups, and 24 achievements to collect, this app will keep you occupied for a long time.

One of the most popular iPhone games of all time, Doodle Jump is not only a great single player game but a great game to play with friends. The aim is the same as single player: get as high as you can by bouncing your avatar on the platforms. A great app for quick pick up and play sessions due to its fast-paced game-play.

If you enjoy playing Monopoly, this app is for you. The app plays exactly like the boardgame. You can play with up to 3 friends over the same WiFi network or by using "Pass 'n' Play", or up to 2 friends over Bluetooth. A great way to play Monopoly on the go.

This game involves you playing volleyball against various monsters. You can play against a friend over Bluetooth. Fast-paced and frantic gameplay, good for quick gaming sessions.

Air hockey on your iPhone. The app offers a few different ways to play against your friends, you can play on the same device, or wirelessly over WiFi or Bluetooth. Very fast to set up and get playing, good for short games.

A slightly strange game, the aim is to eat as many cheeseballs as possible without being crushed by the "giant mutant cheeseballs". You control your avatar by tilting your device left and right. Play wirelessly over Bluetooth with a friend to see who can eat the most cheeseballs.

This app is a full-featured iPhone version of the Nazi Zombies game mode found in some of the Call of Duty FPS game series. It has four of the maps from the World at War game, and maps appear exactly how they do in the console/PC version. You can play cooperatively with up to 3 friends over WiFi in this Nazi Zombie slaughterfest. 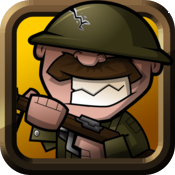 Trenches is an engrossing game about defending your own trenches and capturing your enemies'. An extensive campaign and a zombie mode offer hours of fun, and its multiplayer campaigns are great time killers. You can play wirelessly with a friend over Bluetooth.

An excellent addition to the franchise. You can play multiplayer online with up to 10 friends accross a variety of maps, and there are many weapons to unlock. There are also various vehicles to take control of, from trucks to helicopters. This app gives one of the best modern warfare simulations on the App Store today.

Another great modern warfare simulator, this app will be very familiar to fans of Call of Duty. Silky smooth graphics and gameplay coupled with an engrossing and extensive campaign give one of the best single-player experiences on the App Store, and the multi-player isn't far behind. Ten player local and online games, four different game modes, and 72 ranks to reach mean you'll never be short of something to aim for in this app.

The Forza of iPhone racing apps. Real Racing 2 improves on the already near impeccable experience of the first game with improved graphics, more vehicles (30 licensed vehicles from top manufacturers) and much more gameplay; ten hours' worth, easily. The closest thing to driving a real car on the App Store. The multi-player experience is easily the best of any racing game on the app store, with 16 player races, unheard of before Real Racing 2.

One of the first truly addictive apps, Flight Control is still difficult to put down. You play as an air traffic controller, directing planes onto the correct runways. It sounds simple, but quickly gets very difficult. Play with a friend and try and land as many planes as possible without crashing. 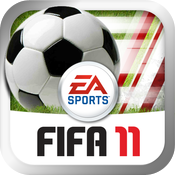 FIFA 11 is one of the best football/soccer games you can buy for your iPhone. The app includes over 500 different, real-life teams, to pit against each other in 30 stadia. The authenticity carries over to the multi-player gameplay. You can play against your friends over WiFi, or team up and take on the computer in a cooperative mode. If you're a footie fan, you don't want to miss this one.