The photo booth has been a classic attraction at fairs, malls, and arcades since before I can remember. We’ve come a long way from the black and white or sepia-toned strip of four pictures. Now we have apps to add effects, stickers, crazy faces, and more. Of course, there are apps that are actually throwbacks to the original photo booths as well. Here is a sampling of the app store’s photo booth offerings for iPhone and iPod touch.

Just like a real old-fashioned photo booth, you get in position, tap the red button, and four shots will be taken in rapid succession. “Pick up” your black-and-white photo strip “outside” the booth and then share the photos on Facebook or via email or save to your photo library. This is a very authentic, simple app with a nice UI and classic feel.

This is a really cute app that lets you put all kinds of doodle stickers on your photos, from facial features and wigs to frames and speech bubbles. The stickers and UI are quite adorable. My only quibble with this app is that you have to upgrade in-app in order to save or share your photos. Along with the ability to save and share, the paid upgrade also removes the ads and give you more stickers to work with. 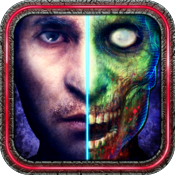 This is the gold standard of scary booth apps. Turn yourself into a real live zombie! Take or choose a photo, place the markers, and go: an animated zombie with your face is growling back at you! Shuffle between a number of different zombie styles, each more horrifying than the last. Choose your favorite, then take a photo or video of the sucker. Share it via YouTube (for the video), Facebook, email, or save it to your photo library.

To me, this is a scarier app than ZombieBooth! If you ever needed motivation to put down that cheeseburger, this is it. Choose or take a photo, place the face, mouth, and chin marker, hit “go” and blam! You’re fat; chins, jowls, and all. If you like, you can send the realistic results to your camera roll, Facebook, Twitter, or email.

Not quite realistic enough to be really scary, nonetheless, this app does make you look really ugly. Just like FatBooth, you place the markers and hit “go”. The results? A wrinkly, age-spotted, rotten-toothed version of yourself. Fun. And yes, you can send the lovely visage to camera roll, Facebook, Twitter, or email. 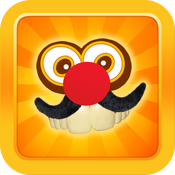 Add some silly stickers to your photos, like Groucho Marx big nose & glasses, funky sunglasses, mustaches, weird teeth, tiara, big ears, and more. Save to your photo album, email, Facebook, or Twitter. Upgrade to the paid version to remove the watermark and ads.

Rather than making you look old, this app makes you look like you are from an older era. This free version gives you four male and four female retro looks. Results are more silly than realistic, but for free, it’s worth checking out if you like this sort of thing. Then you’ll know if you want to pay for the full version, which has over 60 different looks. Save your photo to camera roll, email, Facebook, or Twitter.

One of the silliest booth apps in the app store is SumoBooth: Talking Photo. It turns your photo into an interactive Sumo wrestler. It's really a combination of a booth app and one of those popular talking character apps. Choose a face, set the markers, and see the person of your choice fatter and wearing a Sumo wig. But there's more: feed your Sumo wrestler to make him even fatter. Punch your Sumo wrestler and see him flinch. Talk to your Sumo wrestler and he will talk back in a creepy voice. Save to photos to camera roll and share via Facebook, Twitter, and email. You can even take video of your doppleganger and upload it directly to YouTube along with email and Facebook.

Had enough of making yourself uglier? Now you can make yourself look better instead. Put your face on a model’s body. Add accessories, a tan, more hair, and even make-up. Save your hotter self to camera roll, email, or Facebook.

On a recent trip to Japantown in San Francisco, we happened across a huge storefront full of these trendy Puri photo booths. Well, no need to spend money on expensive Puri booths, because there’s an app for that. Take or choose a photo and then select from dozens of pretty frames, adorable stickers, and colorful speech bubbles. You can also freehand draw on your photos. Save to photo album and share with Facebook or email. This free app offers so many choices, but for even more you can upgrade to the paid version. 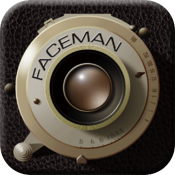 If you love PhotoBooth on your Mac, you’ll love FaceMan. You get more than 20 effects, most of which are found on the Mac. Take picture or video with the effect of your choice. This app has a nice UI and a free version to test out four of the effects. Save the results to your photo library and share via email, Facebook, Twitter, or Tumblr. 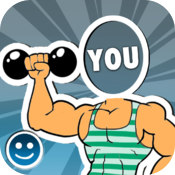 This app allows you to put your own face into nearly one million different scenarios, with more being added literally every minute. The FACEinHOLE website allows users to create their own scenarios and add them to the database for everyone to use. From the Mona Lisa to the characters of Jersey Shore, there is something for everyone. Save and share your photos via email or Facebook.