There are literally thousands of games for iOS. Discover which ones are the addictive ones to run to or run away from! 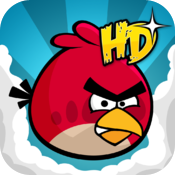 Angry Birds has quickly become a must have app for every iOS device. As fun as it is on the smaller iOS devices ... the iPad has become the best way to play Angry Birds. You can quickly become immersed for hours on end killing pigs with those angry birds. It is great on the iPhone, but even better on the iPad.

One of the original best sellers in the AppStore was Trism. It is still one of my go to apps when I have a few minutes to kill. Trism is best described as a modern day adaptation of Tetris. It is a very unique game that takes advantage of the orientation sensors. This is one game that is better on the iPod or iPhone. It can be strange twisting and moving your iPad around as you would your iPhone. This was my very first addictive game for the iPhone and still is after many years a classic that should be on all iOS devices.

We Rule for iPad

Ruling your own kingdom can become very addictive. Many people come to these games not thinking it will bring you in and entertain you for as long as they do. I was a late comer to the "We" games and they have quickly become some of my favorite apps. WeRule is the most developed of the "We" games. It features many realms and gives you a taste for social gaming and what the other "We" games are like.

We Farm for iPad

WeFarm allows you to rule and run your own farm. It is very similar to WeRule, but for those that want to farm. It does feature one new kind of recurring action of petting animals that gives you motivation to come back to it with more frequency than WeRule does. It as is WeRule is a highly addictive game that can be a time sucker every day if you are not careful.

We City for iPad

The latest addition to the "We" games is WeCity. It is a combination of what makes WeRule and WeFarm great. It takes the petting action out of WeFarm and rebrands it for WeCity in the form of research and studying. It also has the great elements of WeRule and expands upon that. It is personally my favorite version of the "We" games and if I were to recommend one of the three this would be it.

This game is addictive because of all the ways you can play it. It is universal and runs beautifully stand alone on an iPod or iPad. The progress is also synced wirelessly through OpenFeint which gives you the ability to use any of your iOS devices to pick up where you left off. The coolest feature though is combining iOS devices to play this game. You can use your iPad as the screen and an iPod or iPhone as a controller to steer the chopper. You can also hook up your iPad to the television set and use your iPod or iPhone as a remote and experience what the AppleTV will be like for games in a few months. It is a fantastic game that showcases the versatility of iOS and gaming.

Another game that is handy for a few minutes of entertainment is Rope n' Fly. This is a great game for both the iPod and the iPad. It works great in both form factors and lets you control a Spiderman like creature with a goal to jump from building to building. It is very addictive and is one of the few that I play daily.

Scrabble just got addictive with Words with Friends. You can now play wirelessly with thousands of users awaiting to play Scrabble. If you want to learn how to play Scrabble this is a great game to become a Scrabble expert. The push notification makes this game really addictive. It may be wise to turn that feature off so you are not playing it all day!

Plants vs Zombies is another one of those games that just is meant to be played on the iPad. The iPod/iPhone version is great, but nothing beats the iPad version of this game. Your goal is to stop the zombies from reaching the home you are protecting with plants. It may sound kinda crazy, but is an addictive game that can suck many hours from you if you are not careful.