You are using an outdated browser. Please upgrade your browser to improve your experience.
App-dicted
by Brent Dirks
December 7, 2015

Dropbox isn’t the only major company shutting down apps. Facebook has officially closed its Creative Labs division and removed Slingshot, Riff, and Rooms from the App Store.

The news was first reported by CNET, who was able to confirm the removal with the social networking giant:

A Facebook spokeswoman confirmed the apps had been disappeared, noting they hadn’t been updated in some time.

“Since their launches, we’ve incorporated elements of Slingshot, Riff and Rooms into the Facebook for iOS and Android apps,” she added.

Slingshot probably had the highest profile of the three apps.

Originally landing in June 2014, the pictured app was designed to compete against messaging king Snapchat. Users could share both photos and videos with a slight twist – your friends were required to share something back before they could see your media.

In late 2014, a major update to the app arrived tweaking the sharing functionality to act more like the Snapchat Stories feature. But that apparently wasn’t enough to help it gain any traction.

A little more than a year old, Rooms was designed to be an anonymous topic-specific chatroom. It will officially shut down later this month on Wednesday, Dec. 23.

Making an April Fool’s Day arrival this year, Riff allowed users to collaborate and make fun videos with their friends. 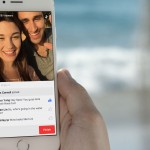 Facebook will soon release an iOS Messenger app to use at work
Nothing found :(
Try something else