You are using an outdated browser. Please upgrade your browser to improve your experience.
by Christine Chan
April 24, 2017 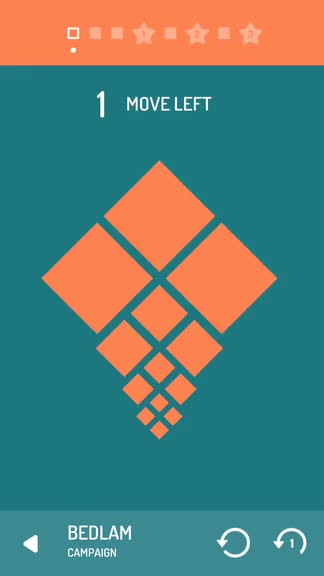 Invert - A Minimal Puzzle Game ($1.99) by Noodlecake Studios Inc and Glitchnap is a puzzle game that is fit for those who love brain teasers, logic puzzles, and even Rubik’s Cube fans. If you enjoyed recent games like Vignettes, Polycolor, or even Trilogic, then you will love what Invert brings to the table.

When I’m under a lot of stress (which happens to be a lot these days), I like to just sit down and play some games for a while to take my mind off of things, even for just a little bit. Personally, for me, I find puzzles to be one of the best types of games I can play when I need to relax, because they’re usually tranquil enough while being challenging at the same time, since I like to keep my mind stimulated. Though sometimes I do feel like I’ve played the best puzzles that the App Store has to offer, I can’t help but always be on the lookout for new titles that may spring up, and Invert is one of them. What surprised me even more was that it was from Noodlecake Studios, who has other awesome games, like the Super Stickman Golf series, under their belt, so I had to check out Invert for myself. 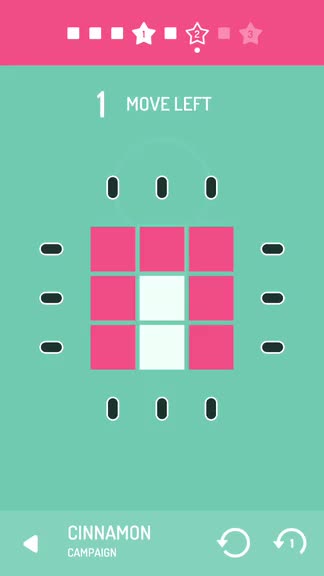 Visually, Invert is just as its name claims to be, which is minimalistic in both form and function. If you’re a fan of minimalism, then Invert is perfect. The game features a flat aesthetic design that is simple and clean while also being pleasing to look at. Invert makes use of a fantastic color palette that features various soft pastels and vibrant hues that compliment each other nicely, and watching the tiles shift color is mesmerizing, to say the least. Animations are smooth and fluid as the tiles flip over and you go from screen to screen, and the atmospheric soundtrack is calming. There’s also some amazing clicking sound effects as the tiles flip and change, so I recommend playing this one with the sound on and a good pair of headphones.

Like many other great puzzle games, Invert features several different game modes, and each mode contains the same 20 level packs to go through. Despite having the same stages, the modes themselves are all quite different, which just adds to the variety and replay value of Invert overall. The game modes contain: Campaign, Challenge, and Expert. In Campaign, you have a limited number of moves to solve each puzzle. Challenge will have you racing against the clock, but you can use as many moves as you need. Expert requires 100 stars before it’s unlocked, so it’s definitely something you have to strive for before knowing how that plays. The level packs each feature their own unique name, color scheme, and game mechanics that are introduced at the start of each chapter, so the difficulty curve is fairly gradual and never overwhelming. The goal of Invert is simple and straightforward: make all of the tiles on the board the same color using as few moves as possible. Sounds easy enough, right? But like any good puzzle game, things get trickier as you advance. You can check your progress to earning a star at the top of the screen while you’re on a puzzle.

The controls in Invert are rather intuitive and easy-to-learn. On each grid of tiles, there will be pegs along each row and column, and tapping on these lets you flip that row or column’s tiles over. At first, the game starts off simple, with toggles for each individual row or column. But then you have switches of different shapes that do different things, like the rectangular peg that flips over a 2×3 section on the grid, or the squares that just flip over the tiles in a 2×2 formation in the corner. The grid and tiles even appear in other shapes in later levels, which just add to the complexity of the game’s intricate puzzles. If you ever make a mistake, you can go back one move with the “Undo 1 Move” button in the bottom right corner. Or if you know you messed up more, you can just restart the level (if in campaign) with the restart button that is adjacent to the undo. You can always return to the level select screens by tapping on the back button in the bottom left corner, and the game saves your progress in that pack so you can pick up where you left off. 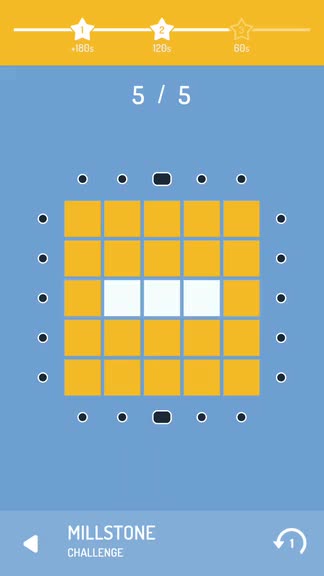 The best thing about Invert is the fact that this is a premium game that contains no in-app purchases. It also relies entirely on your puzzle solving skill, because there are no hints or level skips, so you have to keep at it if you want to make progress. For the most part, this is fine though, since all of the puzzles can be solved through trial-and-error after a few attempts. And while some later stages can prove to be rather tricky, there’s nothing that patience and critical thinking can’t solve.

I’m still early on in Invert, but so far I’m loving the game, especially as a puzzle fan. The minimal style is aesthetically pleasing, and the colors are eye-catching. However, if the colors are too bright when you play in the dark, there is a Night theme that you can switch to in the menu to turn everything into grayscale, which is a nice addition. The music is soothing as well, so it’s easy to put your attention into solving the puzzles. Controls are intuitive and responsive, the myriad of puzzles can be fairly challenging, and the gameplay mechanics are introduced at a gradual pace that never overwhelms. The only thing that is missing are hints for those who prefer immediate gratification when it comes to puzzle solving, but I think it’s better this way since there’s no way to squeeze more money out of you for hints through in-app purchases or watching ad clips. And as I said, everything can be solved by trial-and-error.

I highly recommend giving Invert a try if you’re looking for a challenging puzzle game that will give your brain a workout. You can find Invert on the App Store as a universal download for your iPhone and iPad for just $1.99. There are no in-app purchases. 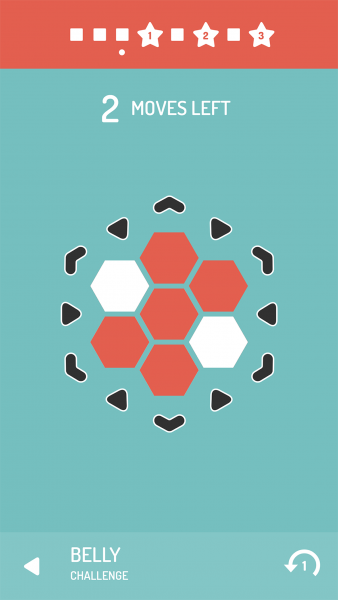 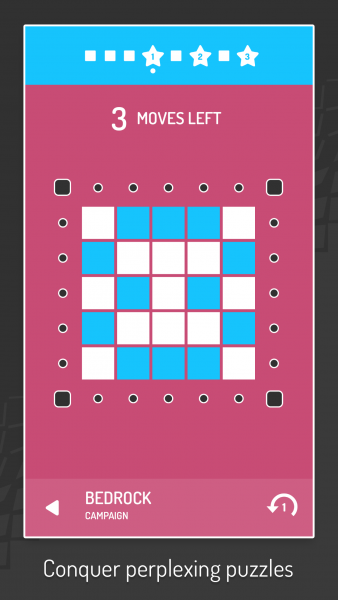 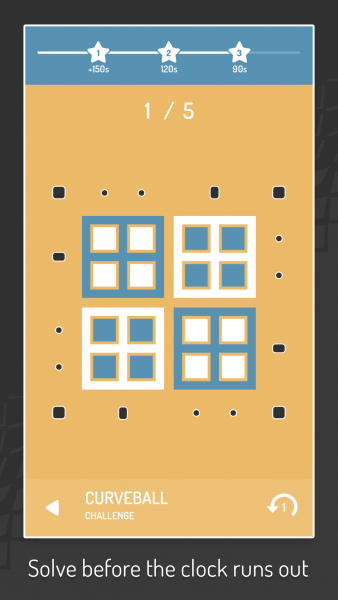 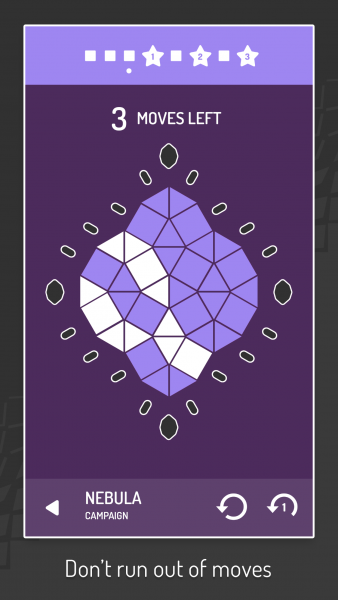 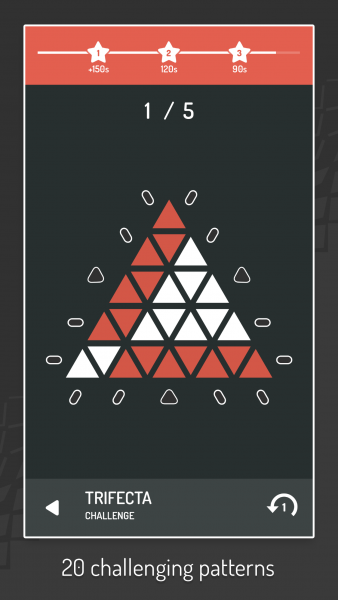 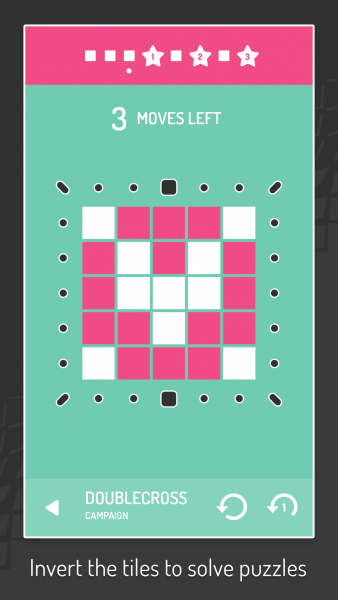