Put your putt putt to the test in these mini golf games for the iPad.

There are many things on earth that should always be taken seriously... mini golf (aka putt putt golf) is one of them. It involves indoor/outdoor carpet, windmills, and paper mache critters, what's not to take seriously? With it's cheesy music and geometric challenge, mini golf can be quite the addiction. Therefore, in this App Guide, we exam the apps currently available for the iPad to see which, if any, best captures the phenomenon that is mini golf.

Oh man, is this game nice. It's nicer than a hole-in-one through a spinning windmill with six grungy kids yelling at you to hurry up. With great 3D graphics, very natural physics, an intuitive control system, some fun tunes, and a variety of courses, Mini Golf Game 3D for the iPad is my essential mini golf iPad app. The app allows you to choose one of four control systems. I definitely preferred the default, known as "Power Flick", as it allows for the most realistic mini golf experience. But the other three systems are also nice, so definitely give them a shot as well. The app comes with two game modes and four courses that feature different playing surfaces such as grass, ice, and sand. Although, as far as I could tell, the only difference between them is the color of the course surface and not any sort of surface friction, slipperiness, etc. A soon to come update will add more courses as well as a male character to the game. About the only gripes I have with this game is the lack of traditional mini golf obstacles aside from a few ramps and water traps and that the courses are only nine holes.

Mini Touch Golf is a really good mini golf game. Its 2D, top down perspective courses faithfully include many of the traditional obstacles that one might encounter such as windmills, dinosaurs, clowns, tunnels, and even some non-traditional ones such as webs, fans, and gnomes! The physics of the game are pretty good, especially with all the odd textures that you sometime have to play through. The controls consist of a drag and release system that is used in a lot of pool games on iDevices. The further back you drag your finger, the harder your shot. It works pretty well, but overall the game seems a bit too easy. Also, the lack of additional courses limits this game a bit as well.

With 3D graphics and some nice features, Tiki Golf HD makes it into the Decent category. It has two different playing styles, one is more traditional mini golf and the other includes secondary targets (pineapples) that you can try to collect as you play the hole. It has multiple courses, known as "worlds", but to get to them you have to complete the beginner course at different levels of difficulty. A neat feature of Tiki Golf that I wish was in all mini golf games is a hole "fly by" before your first shot that lets you see the entire hole layout. My main gripe with Tiki Golf is the control interface. It uses a sliding power bar that is hard to gauge and it lets you influence the ball after you hit it by tilting the screen which just seems like cheating. Of course, you can always choose to not use this feature but it feels like some of the holes were designed with the understanding that you would use this additional control method. Also, the physics seem to be off a bit...Basically the game seems much more like an arcade game than a mini golf simulator. 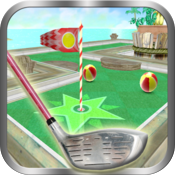