Teleprompter Apps For The iPad

Those looking to invest in an expensive teleprompter may not have to. The iPad has tons of apps available that will turn it into a teleprompter. The price ranges from only a few bucks to around 10 bucks for the more fully featured apps. We compare the best ones out there in this AppGuide. As always let us know if we left out your favorite.

Prompster is a more simplistic option. The app has a lot to love. The text used for your presentation can be created within the app or imported through email or the iTunes file sharing system. The app has no Dropbox or Google Docs integration. The app has a very easy to control interface. The onscreen controls allow you to adjust playback speed, text size, and even record audio. Prompster is for those that want a more simplistic app with fewer features. We would recommend the essential app for most people.

Prompterous HD is an even lower cost option for tele-prompting on the iPad. The app includes the ability to import a variety of file formats including ePub and Microsoft Word. You should be aware that any formatting will be removed. All teleprompter apps work with plain text files. The iPad’s operating system can only natively work with plain text. This is something that may be fixed in a future iOS update. Prompsterous HD includes tons of text formatting options and includes a timer, playback speed controls, and a play/pause button. Those looking to spend only a couple bucks should give this one a try. 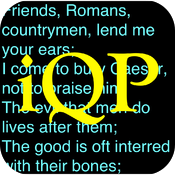 IQPrompter is another good option in the higher end market of teleprompter apps. The app includes a number of innovative features. These include a progress bar, planned duration, autostart time, and countless display options. The app will work with an external monitor. The app is just loaded with features. Those unhappy with the essential app should give this one a try. 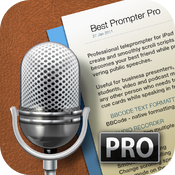 Best Prompter Pro is an interesting app. The app has what first appears to be a simply stunning user interface. But we found that the app is simply too busy. The app would benefit by simplifying the interface. The app is one of the few that lets you format your text. The app will let you do paragraphs and use italics. The app will even let you color your text. The app is a must have for those frustrated by the lack of text customization in other apps. We are excited to see this app shape up into an essential one.

PrompterPad is a solid offering in the teleprompter app space. The app works with a variety of remote controls. These include an iOS app, a Bluetooth keyboard, or even a wired touch tone signal remote! The app has a variety of customization options to make your presentation go smoothly. The app also supports an external monitor. PrompterPad also has a countdown starter and a bidirectional timer. The app is one to consider, but not nearly as good as the essential app. 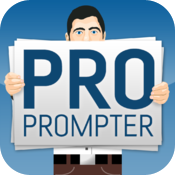 ProPrompter is great for one reason … it is universal. The app runs on both your iPhone and your iPad. We are not quite sure who needs a teleprompter on the iPhone, but it will run on it. The app also can be remote controlled from your iPhone, which is a great feature. The text can be entered within the app or imported using the script manager. The app will work with an external monitor. The reason this app did not make it into the notable category is the interface. The app seems to simply be a blown up iPhone app. There are times when that is a good thing. The app does need a good bit of work for it to compete with the other teleprompter apps. If the app had not been as costly it would have been a notable app. ProPrompter is an app to keep your eyes on, but right now it is not quite ready for prime time.

MPrompt is another option for those looking for a low end solution. The app is plagued with a terrible interface and barebones functionality. The app does have some nice features like font size, speed, and highlight adjustments. The app can even mirror the text for those in a reflector environment. The app is one to keep your eyes on, but it's not quite ready for prime time.