It seems like everyday there is a new virtual pond or aquarium bubbling up in the App store. If you’re into fish, ponds, and aquariums then this guide will help you determine where to spend your money, and which apps to avoid.

Wa Kingyo is a pond-based fish app where you simply scatter flower-shaped bait across the pond and watch the fish swim and eat. Not a lot of management here, but the game is a great stress-reliever and is exceptional in its design. In Japanese, Wa means “peace”, “relaxation”, or “Japan.” Kingyo is the Japanese word for goldfish. This app stands as a representation of classic Japanese art, as the goldfish backgrounds are drawn with a Japanese flair. The bait is a Japanese flower like Cherry Blossoms, Chrysanthemums, and Camellia. If watching fish in ponds is your thing, then this is your app.

Koi Pond HD is the iPad version of the classic Koi Pond for iPhone and iPod Touch, with the bonus of the iPad’s HD screen and really gives this app a boost in quality graphics and textures. This app is one of the most realistic water-based simulation apps available on the iPad. The water is multi-touch reactive, there is plenty of customization like lights, decorations, and plants, eight different breeds of koi, and you can shake your iPad to feed them.

MyReef is a solid aquarium app designed to do one thing: let you watch fish. It does it very well, from the number of fish allowed, to tank backdrops. You can zoom in on a particular fish and watch it movements, and there are 21 species of fish that you can feed. Other features include tank customization like accessories and backdrops, realistic fish animations and behavior, and the ability to customize up to three different tanks.

Here is a true 3D aquarium, not just generic animation. You can choose from 28 different species of fish and customize background and foreground lighting to change automatically. You can also control the sleep on your iDevice while the app is running. This is a universal app for your iPhone and iPad. 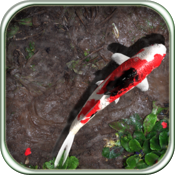 The excellent Pocket Pond HD and its younger sibling iFish Pond HD are great virtual fish apps that feature realistic water ripples, double-tapping to feed the koi, a relaxing nature soundscape, thunderstorm effects, lily pads, dragonflies, and a lot more. You can even catch fish and play with frogs in iFish Pond HD.

This is a the king of the animation-style fish farming apps. Gameplay is extremely additive. I was once quite obsessed with caring for my virtual fish, feeding them and breeding them, but have since given up this virtual hobby. Be careful - many people have spent quite a bit of money buying fancy fish and decor, but I managed to work my way pretty far into this game without spending a dime. There are many versions of this game; I suggest this one because it gives you five free "fishbucks" to start. If you're an iPad user, check out the link to the separate iPad version below.

If you like genetics and breeding, then you should love Fish Tycoon. Your goal is to breed certain combinations of fish to discover the seven magic fish of the island of Isola. This will take some time however as there is a whopping 400 species of fish to breed. You can buy tank paraphernalia and place it wherever you like it, maintain fish in a persistent and realistic world, and buy and sell almost anything in the game. The game continues even when shutting off your iPad or quitting the app.

One of the only fish aquariums in the app store to feature a mix of turtles, sharks, and koi, Aquatica will have you watching feeding frenzies as you dump food into the aquarium, your finger getting chased by the fish as you tap around the screen, and watching the fish scurry away as you jolt them with a dose of “friendly” electricity. Don’t let PETA get a hold of this app. Oh wait; they only care about things with fur. Nevermind. 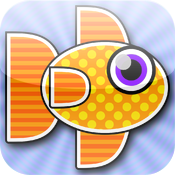 Here is an aquarium with a totally different look and feel from your normal fish tank. These fish have a cool geometric shape and cartoon style with tons of different variations for colors, shapes, patterns, and fins. Simply buy an egg from the shop and it will drop down into your tank. Each fish is already named for you if you don’t like to micromanage, but feel free to rename it if you don’t like it. The fish will change colors as they mature then get old and die, and you can even flush them down a toilet by hitting the toilet button.

My Aquarium features 31 species of fish, 22 decorations that you can move around at your leisure, 5 different backgrounds including using your own photos, and a shake feature that lets you shake your phone to feed the fish. You can also hit the randomize button to instantly change the look of your tank without taking the time to micromanage it.

Here is another virtual aquarium with realistic fish movements and scenery that you can customize to your liking. You can create up to three separate tanks each with different decorations and fish, and you can tap on the glass to annoy your fish. Lights can be turned on or off to put your fish to sleep, and you have plenty of other options like setting the accelerometer, a help screen, and lots of menus. 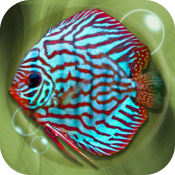 Topical Aquarium features both saltwater and freshwater tanks to customize. It boasts 23 species of fish (32 in the premium version), portrait display option, move and zoom using touchscreen gestures, and the ability to annoy your poor fish by tapping on the glass. 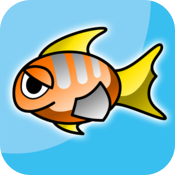 Are you sick of ultra-realistic this and ultra-realistic that? Try this all cartoon version aquarium. The main goal is to see your fish grow from little fish to big, mature fish. Start with a couple hundred bucks to buy your first few fish with, then name them and choose their colors. You must proceed to feed and care for them, and avoid starving them before they start eating each other. Little pop-up messages reveal how the fish are feeling at the moment. You can remove the ads in this free version with an in-app purchase.

Catch Me If U Can

If you enjoy catching fish, then give this app a go. You can catch fish at your leisure, or try your hand at PRO mode with varying speeds; all while avoid catching the sea turtle and losing points. If you don’t feel like catching fish, you can just watch them swim. After all, that’s why people buy real aquariums, isn’t it?

Enjoy all of the benefits of a real freshwater tank without the maintenance and hassle with FreshWater Aquarium by EuiBeom Hwang. You can feed, breed, and chase your fish friends, and you can even try the newly added mini fishing game. This aquarium also features a bubble-making mode, an auto save system, lots of backgrounds to choose from, and a shop menu for buying lots of fish.

Fish Farm is similar to other raiX UG apps like MyReef 3D Aquarium, 3D Aquarium, and Tropical Aquarium. This app has 57 3D fish to choose from with more in future updates, tank customization with 45 different items, decorate up to ten tanks at the same time, and the ability to play your music library. 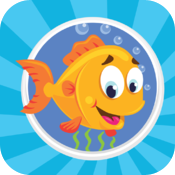 This is a fun little fish aquarium for those who don’t care about ultra realistic graphics and water effects. You can buy and sell all kinds of fish and marine life with “fishbucks”, and you can arrange and rearrange decorations to your liking. You must feed your fish and make them happy or they will die. Don’t worry though; you can flush your virtual dead fish down the virtual toilet.

PocketAquarium is a collection of videos of freshwater and saltwater aquariums on your iPhone. There is no customization, and the app is a phone-busting 100 MB. If only the real thing will do and you have the space, go for it. 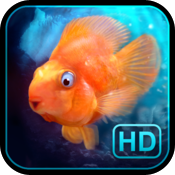 This is a good-looking aquarium that takes a really long time to unlock to its full potential, and it has a few bugs to be worked out to fully enjoy. If you have the patience for unlocking things slowly then you should definitely try this out, as the graphics are pretty sweet. You just won’t be seeing a lot of them for a while.

Another cartoon aquarium, Galactic Aquarium is cute and fun and has the staying power to keep you entertained for more than a couple of minutes, unlike other aquarium apps. However, not seeing your fish actually swimming around is boring, and the app just kind of works by itself.

A truly 3D, fully customizable and interactive fish aquarium for your iPad, My Fish 3D Aquarium is based on the 3D Desktop Aquarium Screensaver for Mac and Windows. All the basic features are here, including the ability to name your fish. This is a universal app for iPhone and iPad.

This one was suggested to us by a reader. It is certainly an attractive app. However, after playing around with it for a while, I found it really confusing. I could not figure out what to do, and when I finally found the Help button, the instructions were written so tiny that I literally couldn't even read them. It does have GameCenter connection which is a huge plus for many people. So if you have more patience than I do, check out this free buy-breed-feed genre aquarium app and try it out for yourself. The iPad version is linked below. 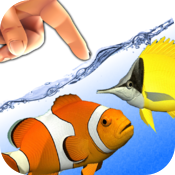 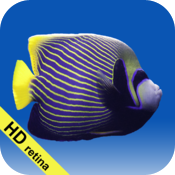 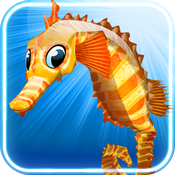