You are using an outdated browser. Please upgrade your browser to improve your experience.
App-dicted
by Aldrin Calimlim
November 13, 2015

Apple has just launched a couple of new featured sections on the App Store highlighting apps and games that take advantage of the bigger screen and better performance of the iPad Pro.

One of the featured sections is titled “Amazing Apps for iPad Pro,” and it showcases creativity and productivity apps that lend themselves well to running on Apple’s largest and greatest iPad yet.

It includes a subsection called “Enhanced for Apple Pencil,” which, of course, features apps (like uMake and Procreate) that have been made compatible with Apple’s iPad Pro-exclusive pressure-sensitive stylus. It also has a subsection called “Desktop-Class Apps,” with apps (like Pages and Numbers) that allow users to do on the tablet what would normally be done on a PC. Further, it includes “Powerful Multitasking,” a collection of apps (like Trello and Outline+) that support the Slide Over and Split View multitasking modes on iPad. 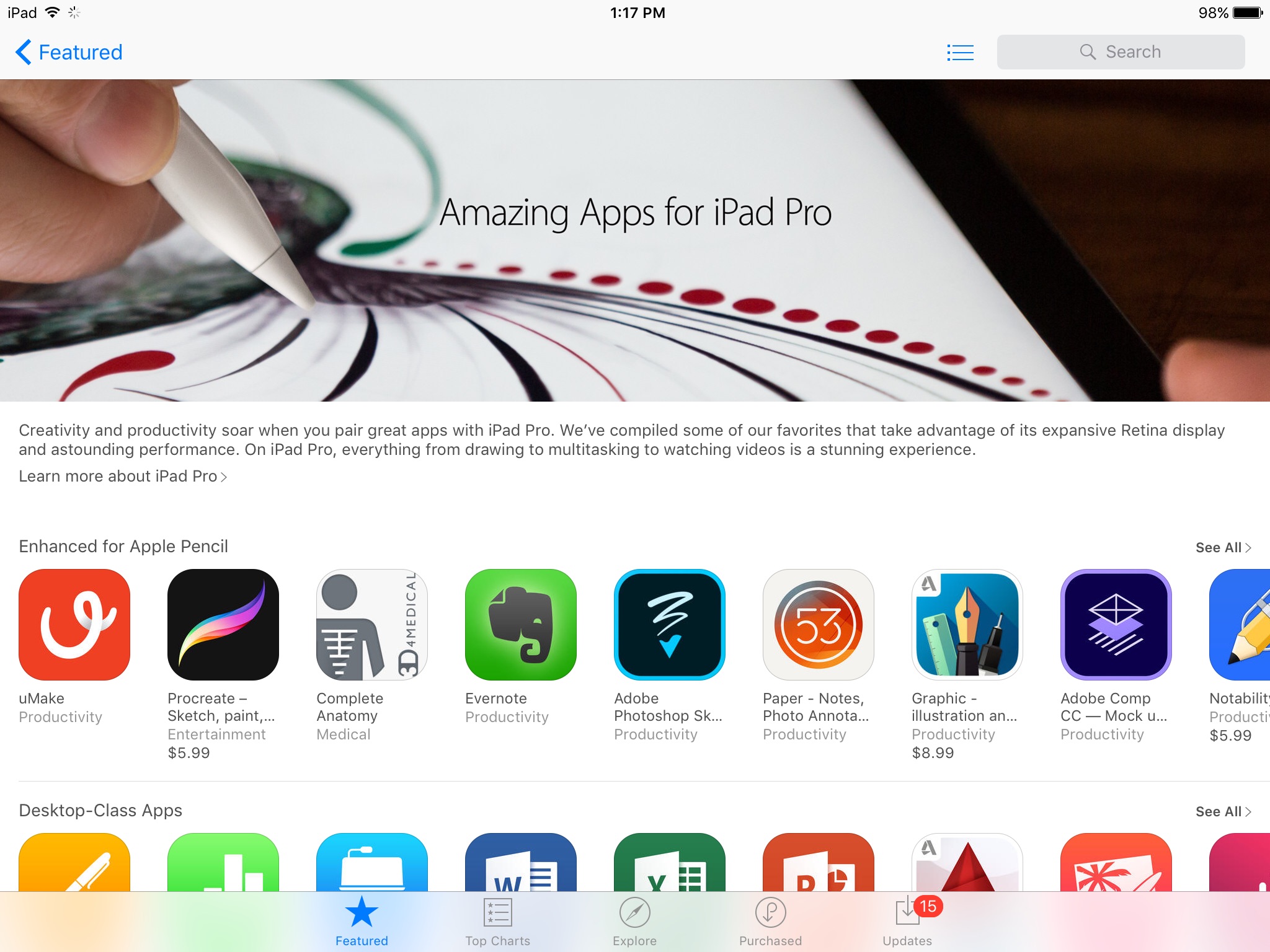 In a recent interview, Apple CEO Tim Cook said that the iPad Pro would appeal particularly to creatives and consumers of music and movies. Small wonder, then, that there are also subsections called “Unleash Your Creativity” (including apps like iMovie and Adobe Photoshop Fix) and “Better with a Bigger Screen” (including apps like Netflix and Hulu).

There’s also a collection of apps called “Immersive Experiences” that feature apps (like Vrse and Sky Guide) that favor virtual and augmented reality or other forms of visual and aural immersion.

Of course, like any other iPad, the iPad Pro is a gaming device as well as a creativity and productivity tool. And so the other featured section highlights “Great Games for iPad Pro.”

The games showcased in this section are divided into three categories: “Gorgeous Games” for titles with “breathtaking graphics” (like Shadowmatic and Geometry Wars 3: Dimensions Evolved), “Fantastic Sounds” for titles with “spectacular sound” (like Superbrothers: Sword & Sworcery EP and The Sailor’s Dream), and “Big Screen, Big Fun” for titles with “immersive features” (like Minecraft: Pocket Edition and Hearthstone: Heroes of Warcraft). 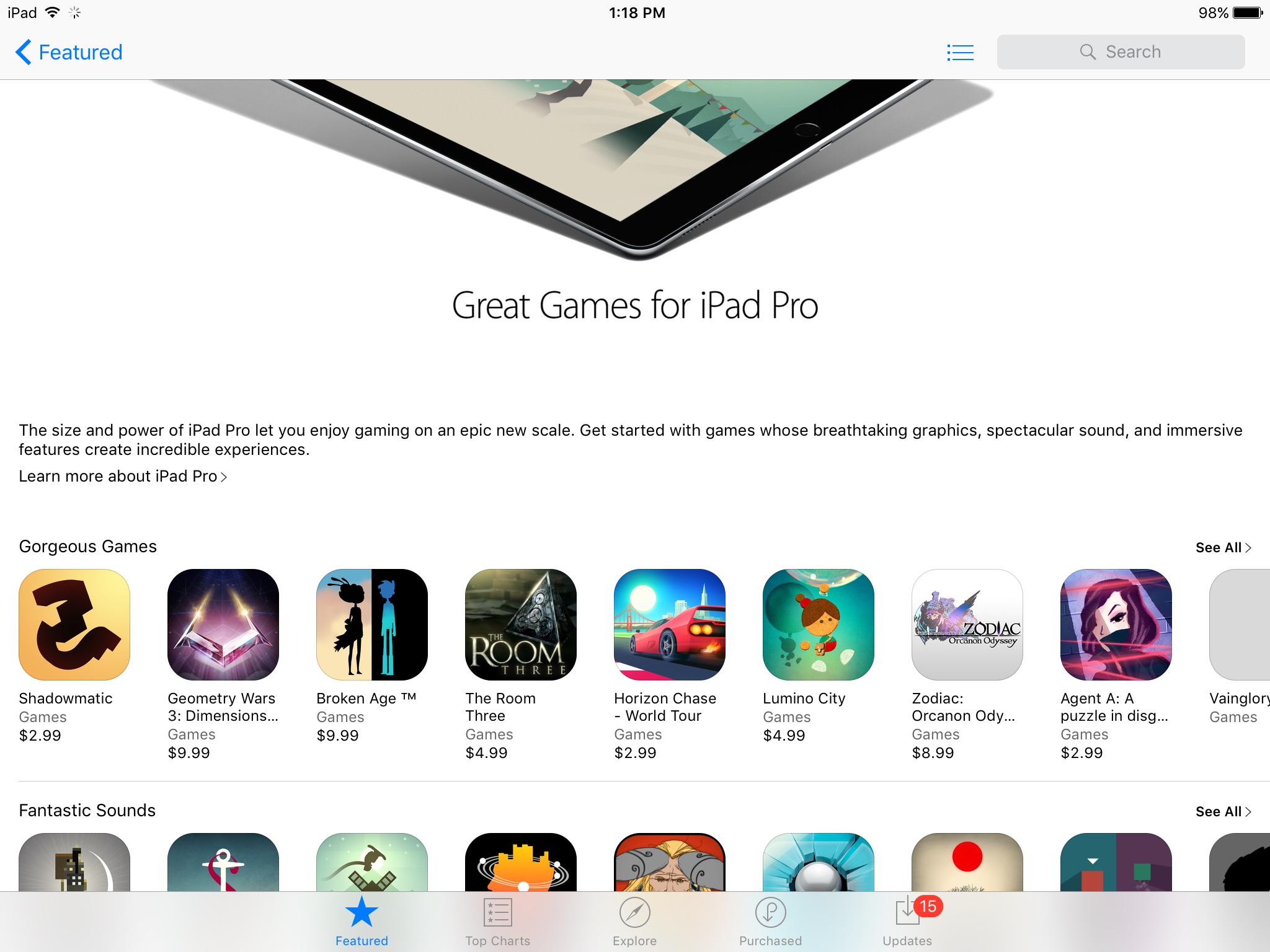 It’s worth nothing that some of the highlighted apps haven’t been updated specifically for iPad Pro, but nonetheless work quite well on the new tablet.

Also worth noting is the fact that even if you don’t have an iPad Pro, the new featured sections let you discover excellent apps and games to use and play on your iPad.

The featured sections on the App Store for the iPad Pro come just a day after the device was released by Apple.

The iPad Pro starts at $799 for the 32GB model, which is available only with Wi-Fi. Its 128GB variant is priced at $949 with Wi-Fi and $1,079 with Wi-Fi + Cellular. It comes in three metallic finishes: silver, gold, and space gray. It’s available to order online and pick up in stores.

The iPad Pro is the largest and most powerful iPad yet with a 12.9-inch Retina display and a 64-bit A9X chip. It also features compatibility with the Apple Pencil and the Smart Keyboard.

The Apple Pencil and the Smart Keyboard are available now to order for $99 and $169, respectively. Both accessories are expected to arrive in stores as early as next week.

See also: The iPad Pro is like 1984 all over again, Does the iPad Pro outperform the MacBook or Surface Pro?, and Review roundup: what kind of splash has the iPad Pro made? 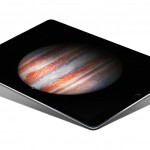 The iPad Pro is like 1984 all over again
Nothing found :(
Try something else