You are using an outdated browser. Please upgrade your browser to improve your experience.
by Christine Chan
February 7, 2017 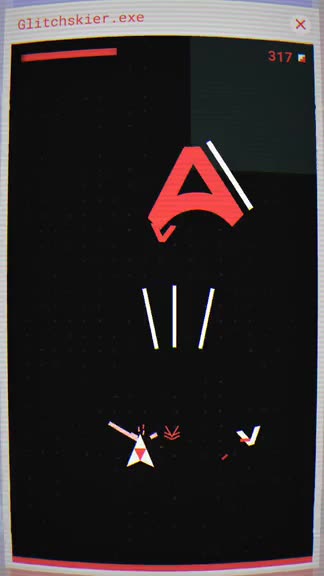 Glitchskier ($1.99) by Shelly Alon is an action-packed arcade shooter bullet hell game that is just about as retro as it can possibly get. If you enjoy vintage skeuomorphism in your games, such as with Her Story and Telepaint, and you want to shoot stuff up, then Glitchskier is definitely the game for you.

These days, I’ve been going through a lot of stress so I have found respite in video games, as I’ve always done for many years. While a lot of my gaming is on the PlayStation 4 these days (nothing beats killing hordes of monsters in Diablo 3), sometimes I need a break from that too and so I turn to my 3DS or iPhone for some games. Even though I usually like to relax with puzzle games on iOS, these days, I really feel the need to just blow some stuff up. For those moments, I like to turn to arcade shooter games, because these are the types of games to be played in quick sessions, but you still get enough satisfaction each time. When I saw Glitchskier on the App Store from Shelly Alon, I knew I had to give the game a try, not only because I love the classic style of old computers, but because I am a fan of the developer’s other games, Partyrs and Sputnik Eyes. Needless to say, I think Glitchskier is one of Alon’s greatest releases to date. 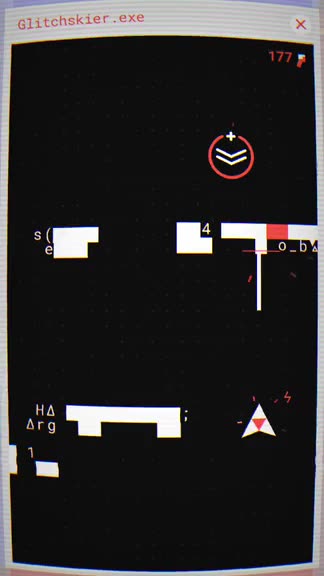 In terms of visuals, Glitchskier has a completely unique look and feel to it that will remind you of the days of computers when CRT monitors ruled the world. And it not only looks like an old computer, but Alon has gone out of the way to recreate the experience of using a computer on your iOS device as well. The game launches to a startup screen that reminds me of my MS-DOS days, and then you’ll find a file browser window that gives you options for viewing installation notes, info, and the bin folder that contains the .exe program, game data, and where you access settings. You also have to double click on things to open them, and even the typeface is a traditional sans serif so the aesthetic is complete. The color palette is mostly in grayscale with splashes of red, though there are 12 color themes available if you want to change the hues. Animations are buttery smooth and fluid, so there was no issue of lag or choppiness on my iPhone 7. Glitchskier also has realistic, old computer sound effects and an awesome ambient techno soundtrack that just completes the package. Alon did an excellent job with the visuals and audio in Glitchskier, and these two factors alone make the game entirely worth it.

While there is only one game mode in Glitchskier, the game is procedurally generated, so it’s not going to be the same experience twice. However, the enemies, obstacles, and bosses that you’ll encounter will remain the same on each run, but the order and layout changes every time you play. This adds variety to the game and I find it rather exciting, because it’s not monotonous and you can’t just memorize the patterns over time. The goal of Glitchskier is simple enough: get as far as you can while racking up as many points as possible before you fall. While it starts off fairly easy, the difficulty picks up the farther along you get, because there will be more obstacles, enemies, bullets, and of course, bosses.

Controls in Glitchskier feel natural and intuitive. All you need is one finger and all you have to do is drag it around the screen to move your ship (reminiscent of Asteroids) and shoot at the same time. Your standard attack is a basic laser that shoots straight out in front of your ship. To make things interesting though, there will be various weapon power-ups that you can collect (icons surrounded by a circle) that will boost your firepower, such as a widespread or rotating shot so that you can get things that you’d otherwise miss, a laser beam, and more. If you get hit, things will slow down briefly and you lose your power-up. The game ends when your ship takes too much damage. 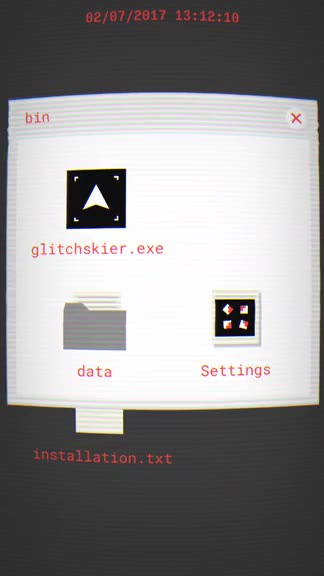 Because of this incredibly simple control scheme, Glitchskier can be played entirely with one hand. This makes it a game that you can pick-up-and-play while waiting in line at the store, which is awesome. If you don’t like the default control scheme, there is also a “Relative Touch” option in the settings if you want better movement.

I’ve only just started with Glitchskier, but I can confidently say that this is a game that I will be keeping on my device for a long time coming. The old-school hacker-like graphics are done incredibly well, the music and sound effects are just candy for my ears, the controls are responsive and work well, and the gameplay is challenging. To be honest, this is one of the best arcade shooters that I’ve tried in a long time, and that’s not an easy feat.

I highly recommend grabbing Glitchskier if you are looking for an amazing arcade shooter game to pass the time. Glitchskier is on the App Store as a universal download for your iPhone and iPad for just $1.99. There are no in-app purchases. 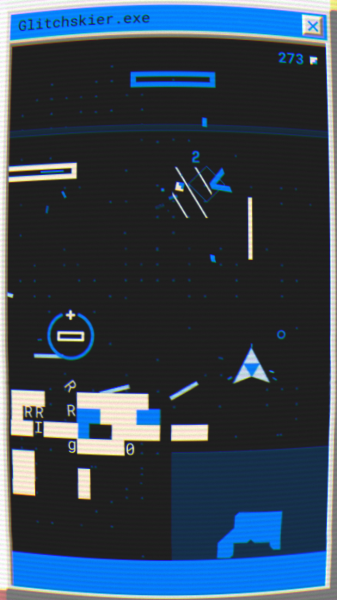 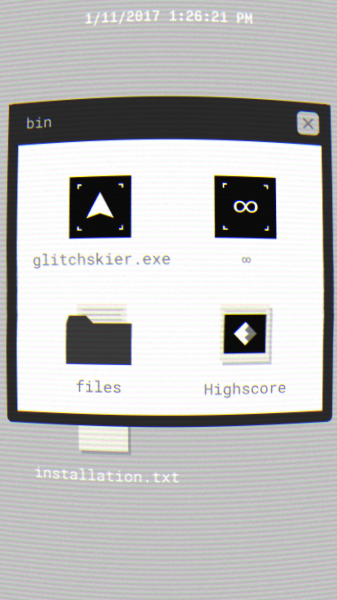 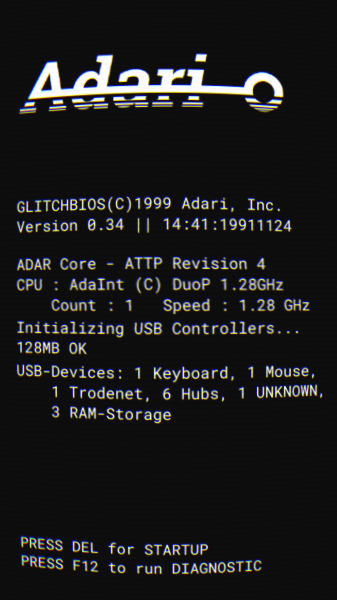 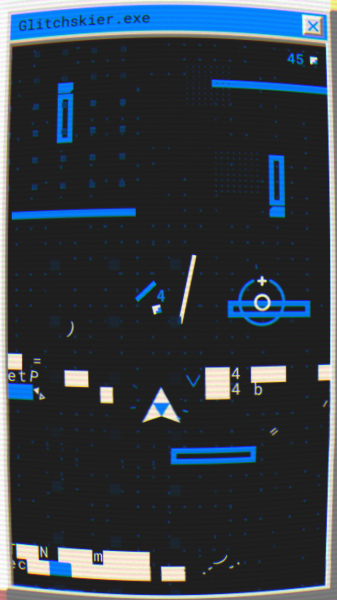 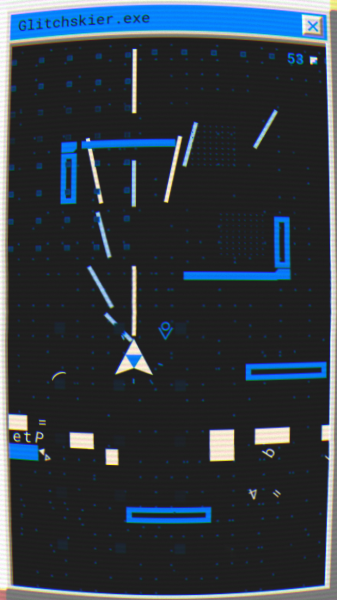 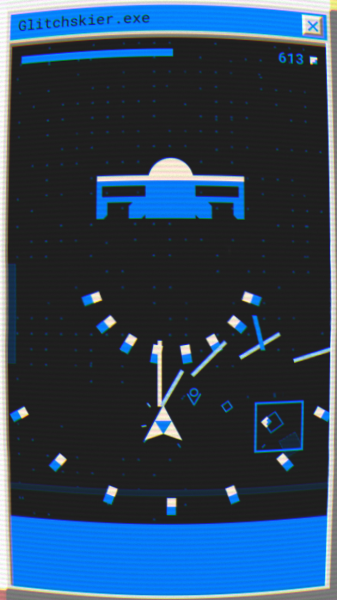 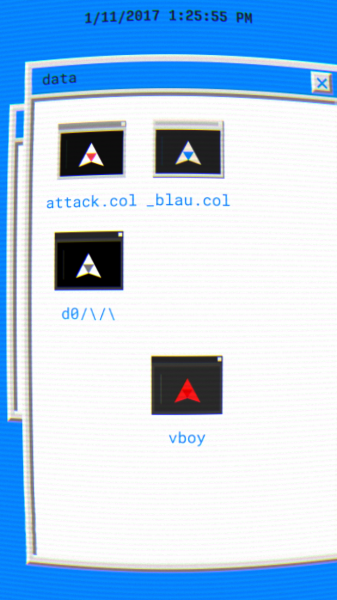 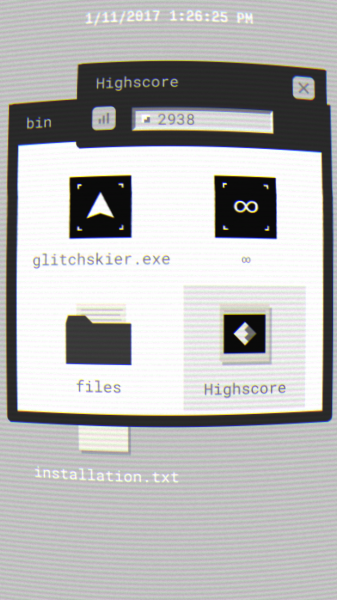 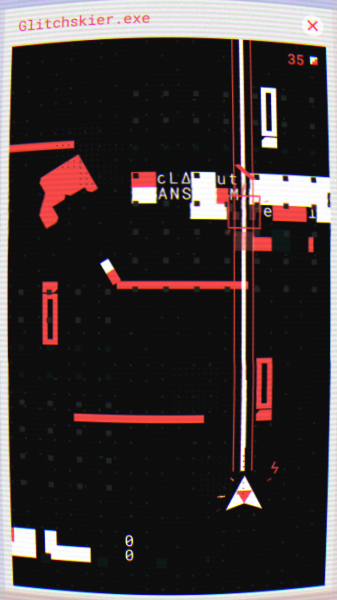 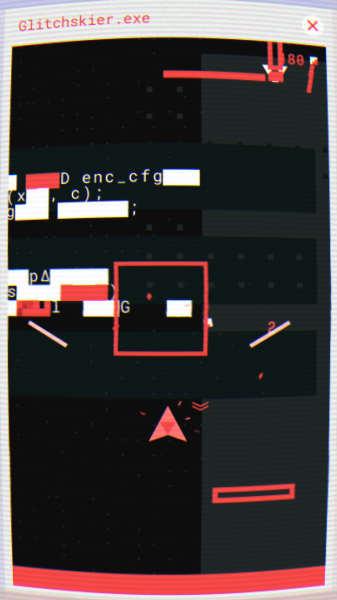 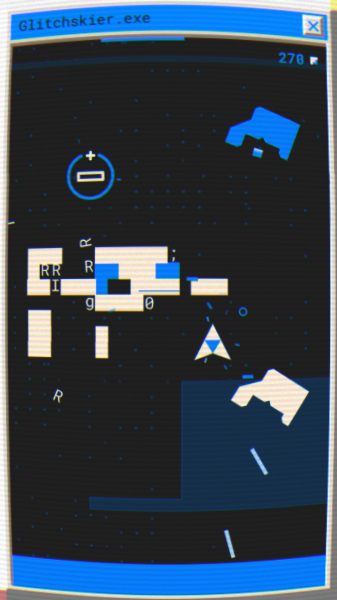 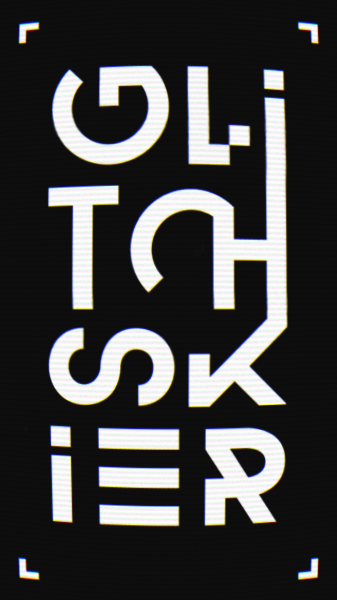 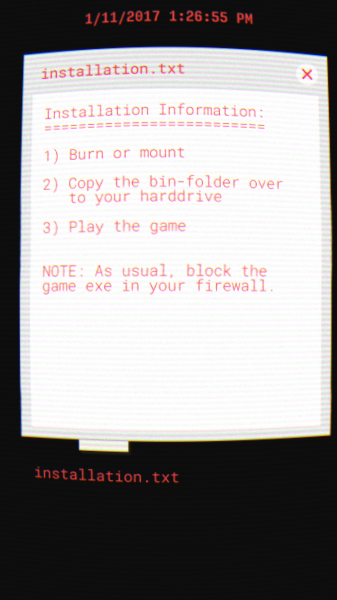 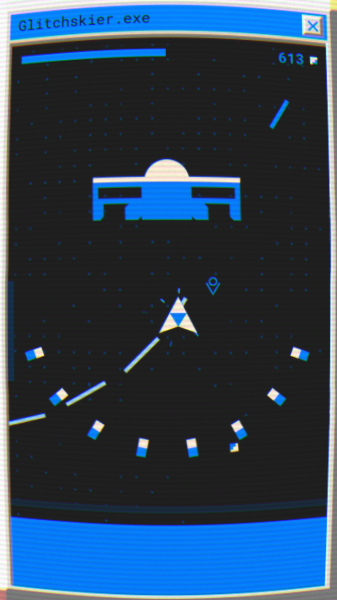 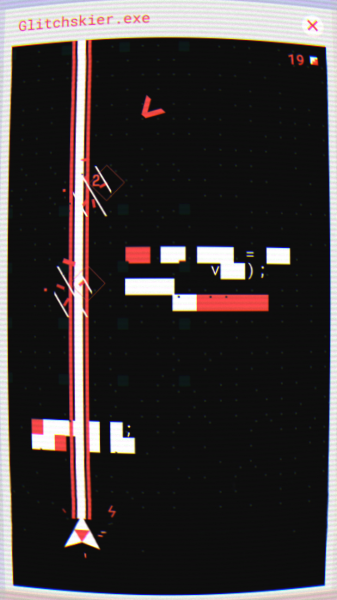