Be king or queen of the table

The game of pool is one of the easiest games to learn but one of the most difficult to master. Many pool and billiards games exist in the App Store and have been solid mainstays, but many of them are subpar and not worth the time or expense. If you want to play the coolest pool games, rack up this guide and take your best shot!

Pool Rebel is a great pool game with a wide variety of games. These include 8-ball, 8-ball UK, 9-ball, Continuous, and One Pocket. The amount of customization on the ball is incredible, enabling you to place top spin, back spin, side spin, amount of power behind your shoot, and the ability to nominate specific balls and pockets, and a lot more. There are adjustable difficulty levels and an unlimited undo/redo function. This is my personal favorite at the moment.

This another pool game that features tight, realistic graphics and many modes of game play: time trial mode, matrix mode, and two player 15-ball mode where you can compete against a friend. It takes advantage of the iPad’s plentiful screen space and crisp graphics, and is easy to pick up and play.

One of the better pool games in the App Store, Killer Pool features finger swipes for shooting, realistic physics, official APA 8-ball and 9-ball rules, official-sized tables, tournament mode, and much more. It also features a unique version of play called Octokiller, which is played on an octoganal table where players eliminate each other by sinking their balls; the last player with balls on the tables is the winner. Killer mode is a classic multiplayer game that you can play with up to ten players.

For those who love snooker, this game is for you. Here you play as Ronnie O’ Sullivan through the highlights of his career including his world championship wins. The game allows you to play others over the Internet and features great physics and awesome graphics, plus a home table where you can practice at anytime.

Another billiards game by I-play, this one features the pool star Steve Davis in an online pool game that features 8-ball, 9-ball, straight pool, and a trick shots mode. The online mode lets you play up to eight players at a time. The game features three international pool championships including the World Pool Masters, Premier League Pool, and the World Pool Championships, taking on such pool greats as Steve Davis, Ralph Souquet, Francis Bustamante, and Earl “The Pearl” Strickland. 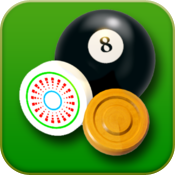 Pool Break is one game that has fantastic replay value. To start, Pool Break has eleven types of pool games, all with a realistic feel due to the great physics engine that the developer included. What is really unique about this game is the online aspect that includes real time chat as well a playing with Android users. Aside from that, this app is a regular pool game that is highly recommended for those who enjoy pool.

Midnight Pool was the top pool game when it was released, and still holds it own against the newer games that have popped up since its release in mid 2009. The graphics still owe a lot to the playability to this game. Midnight Pool includes seven bars and seven characters to choose from, 8-ball U.S. and UK, 9-ball, 2-player mode, and a challenge mode to help you master several trick shots.

Micropool has 4 games: 8-ball, 9-ball, Killer, and speed. It has realistic graphics and authentic sounds to make it a good time waster. You can adjust the difficulty level, start your pool game where you left off, and the whole game is built upon ease of use for the beginner and advanced pool player.

One of only a handful of pool games to include snooker, Adrenaline Pool Online 2 also features your normal game sets like 8-ball, 9-ball, and Straight, and also includes automatic match making, voice chat, worldwide ranking, and friends lists.

If you’re a Snooker fan, look no further than this app. Crisp HD graphics on the iPad, good ball control and physics, and the ability to play against the masters. I would like to see tighter fine-tuning of shots, and the balls seem just a little stiff. However, you'll be hard-pressed to find a better Snooker game in the App Store. 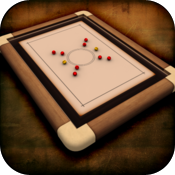 Welcome to Crazy Pool 3D, where there are no traditional pockets like in normal pool, but one big “ditch” around the playing area. You must rid the table of red balls but keep the yellow ones from falling. This game will certainly test your pool skills. Great graphics and all around fun pool game. Crazy Pool 3D is also Open Feint enabled, and there are also achievements to unlock. 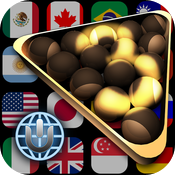 Pool Pro Online 3 for iPad was rated as one of the top 15 must-have games for the iPad when it was released in early April 2010. It boasts all of the features you’ll find in any standard pool game like 8-ball and 9-ball, but also includes snooker. Online features are fairly standard including online chat and a global leaderboard. You can earn in-game cash and spend your winnings on things like new felts, cue sticks, and pool halls.

Watch movies of Curly the hustler guide you through six pool halls and 122 opponents, with tips and tricks showing you the ropes on how to make great shots. Included are ghost balls and aim lines that help you accurately set up difficult shots. Virtual Pool HD supports both landscape and portrait modes with 3D backdrops.

This is another “older” pool game that exists in the App Store, and it’s starting to show its age. However, it’s still a good pool experience if you like realistic sounds, 3D backdrops, and shot customization. Anytime Pool also has 14 opponents, five international locations including China and the UK, and the ability to invite Facebook friends.

Compete against 32 opponents in this iPhone pool game with a pass-and-play functionality between two players. There is also an arcade mode that has you passing challenges in order to earn gold, silver, and bronze medals.

In Pool Ninja, your task is to complete each of 60 challenges over three difficulty levels in the fastest time possible by clearing all the red balls from the table. The levels get progressively more challenging as you unlock each one. Pool Ninja has Plus + integration with 1000 award points and leaderboards.

Here is a nice pool game for the iPad that looks fantastic and handles beautifully. It only has three game types, three difficulty settings, and four characters to choose from, but what it lacks in customization it makes up for in physics, graphics, and fun. It has a few bugs to work out, but I predict it will be one of the top billiards games in the App Store soon. Check it out.

Inferno Pool is a billiards game where every ball you pot is dropped on your opponent’s side of the table. There are no turns; you just go for it. It’s fast, frantic, and a lot of fun. You can play against AI opponents or against the clock. It boasts realistic physics to the point where you can even knock balls off the table, just like the real thing!

Here is an alternative pool game with a different spin on billiards. You must pot all the balls on the screen before they explode. Sounds easy, but clunky aim mechanics make it harder than it should be. Try the lite version first.

Motion Pool is your standard billiards game that lets you use your iPhone as the actual cue by laying it flat and moving it like a pool cue in the direction you want it to go. You can also aim by tilting your device. The game comes with only two game sets, 8-ball and 9-ball.

Baseball Games For The iPad