You are using an outdated browser. Please upgrade your browser to improve your experience.
by Bryan M. Wolfe
January 13, 2013
Apple doesn’t officially exhibit at the International CES. Still, Cupertino’s presence is always felt. Here are just a few of the iOS device-related products we saw during the week that was in Las Vegas.

Whether it be the battery case from uNu or the SmartWorks BrickCase, the number of cases available for Apple's flagship product has grown considerably during the past week. Incipio’s Waterproof Atlas Case is unique in that it comes with its own one-year warranty. As Brent Dirks reported, this covers the smartphone and case from accidental damage and includes repair or replacement of the iPhone 5. A simple app allows users to complete warranty registration quickly after purchasing the case. Do you want to protect your iPhone even when throwing it against a wall? Look no further than the Ballistic SG Maxx case. As Ramy Khuffash reported, the case joins an ever growing line of cases that are less about making your device look pretty, but more about protecting your phone from almost any situation. Battery cases for iPhone remain popular. Some of the newest come from uNu. In particular, the uNu DX Protective Battery Case is said to double your talk time, which is a pretty big deal. We also saw iBattz's extensive line of battery cases, which are also worth checking out. Finally, as Juli Clover explained, LEGO-like cases for the iPhone remain popular in 2013. Among the best are ones from SmartWorks called the BrickCase. The cases are available for the iPhone 4/4S, the iPhone 5, and the fourth-generation iPod touch.

Products for iPad users were also plentiful at CES, including the following. Apple has yet to release an official stylus for iOS devices. Still, that hasn't stop others from doing so. One of the more interesting is the Pogo Connect from Ten One Design. As Aldrin Calimlim suggested, the Pogo Connect is considered to be the “world’s first Bluetooth 4.0 smart pen for the iPad.” Pens not your style? Griffin is out with a brand new line of iPad (and iPhone) accessories for the entire family. The most interesting is the new Crayola Light Marker. As Lory Gil explained, the glowing marker-shaped digital stylus detects movement and transfers the information to the iPad so your little one can draw on the wall and the art will show up on the device’s screen. It can be used with multiple apps, like Dot to Tot, Paint Splatter, Coloring Pages, Puzzles, Hide ‘N Seek, and Free Draw. The Crayola Light Marker will be available this spring for $29.99 and the apps will be free to download from the App Store. Still stuck on cases? Indeed, new iPad cases were on display at CES. In particular, we enjoyed the wooden cases available from Toast, and Looptworks' line of cases made from reused leather.

Ever since Beats brought coolness back to the headphone market, others have hoped to duplicate their success. One of these is iLuv, which is out with their new line of ReF headphones. Designed for the fashion-conscious iOS device user, the headphones come with a titanium diaphragm that provides a wide dynamic range with mega bass and precise treble. They also look extremely cool. Need a new set of speakers for your iOS device? Westinghouse is out with new models in the company's Unplug Series of speakers targeted for mobile or in-home use.

Perhaps the coolest product at this year's CES was the Cookoo Smart Watch. Take a look and enjoy! 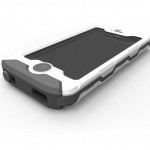 CES 2013: Incipio’s Waterproof Atlas Case Comes With Its Own Warranty 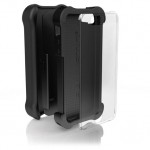