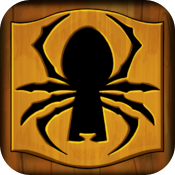 Spider: The Secret of Bryce Manor

An amazing experience where you play as a spider. Not a true platformer since there are now platforms or enemies. It has a platformer level progression though. In each level you draw webs to collect bugs. Four gameplay modes are included as well as online high scores adding to an already great game. However you categorize Spider, it's an essential game.

Dizzy Bee 2 builds upon the polish and charm of the original adding a whole lot more. What makes Dizzy Bee stand out is that it uses a labyrinth type control method where you tilt the idevice to move Dizzy Bee. Every level you have to pick up fruit friends, and guide them to the exit. The level design is extensive on a small scale, and the enemies are the toughest of any iPhone platformer. Like Rolando 2 it's one thing to complete the levels, and quite another to save all of the fruit, and collect all of the flowers. An iPhone unique experience that is great in every way. Very small margin between it, and the superb Spider: SOBM. Offers a whole different experience making it essential too.

Thee Puzzle Platform game for the iPhone. Guide the yellow chicken in four deluxe environments. Just tap where you want it to go, and it will go. There are platforms, and level progression, but every level needs you to analyze what to do first. It's not just going ahead blindly, but instead analyzing the entire level to collect all of the eggs. One of the best games for the iPhone, and easily essential regardless of category. Puzzle Platformer fan, I give you Toki Tori, though it's a port so it lies behind the two original games Spider: SOBM and Dizzy Bee 2. *Note Edge from Mobigame would be in the Essential category, but isn't included in the "buying guide" since you can't currently buy it.

Gomi is a unique platformer where you roll around, and try to collect all of the materials in a level using a katamari like technique, but more. It also uses the super mario galaxy type gravitational pull to jump between platforms. It has all the charm from Bovinedragon's original free title Trace. A great unique platformer with a wonderful eco friendly theme. A little slow moving, and does have basic art design (great in its own way) leaving it just out of the essential category.

Hi, How Are You: 40 Awesomely Totally Ridiculous and Very, Very Cool Levels of Bizarrely, Bizarre Fun!

Puzzle Platformer is the best way to describe Hi, How Are You. Every level requires touching every platform in the level in the allotted time. A very uniquely designed game with strangely outrageous colorful, and slightly psychedelic worlds. A superb game that is just a little more basic than the amazing games in the essential category.

Swing your way through levels with 2D worlds, and 3D characters. A very unique game made by Illusion Labs that requires swinging one direction with the left side of the screen, and other with the right side of the screen. Included is a complex set of levels, and many unlockable characters. Each level is graded from bronze to gold based on time, and stars collected. A top notch production, but the controls are so iPhone, and yet may be a barrier for some. Very difficult leaving it just behind the games above.

Originally I thought this was casual endless. That was until I played it, and saw how the game progressed through levels of increasing difficulty. If it was just survival swing as far as you can, then it's endless, but this is so much more. A great swinging type platformer with 16 bit fun. Basic repetitive gameplay though so every level is just tapping to swing, just with new obstacles introduced. Stiff competition leaves it behind.

Imagine Pong as a side scrolling platformer. Flick forward and backwards for the ball to move, and try to break all of the colored bricks in a level. You progress through multiple lengthy levels bouncing in and out of tight squeezes. A unique idea, but nothing too remarkable. Gameplay is extremely repetitive, and just can't have that with the games it's contending with.

Extremely untraditional, and that's what's great about it. Guide Alice in a whole new more explosive wonderland, known as Bomberland. Jump, and doge your way through all types of bombs, but with the familiar story, characters, and settings. Truly one of a kind with great gameplay and exquisite visuals. If you even know of Alice this is a great pick up. Just jumping though so it doesn't quite reach the levels of the top games in this category.

Original Dizzy Bee is just behind the sequel. Both games will provide hours of fun.

The game has high quality production values, but that's about it. Thor feels more like Run! and Canabalt with some tapping object game thrown in. It doesn't have nearly enough action to compete with games like Run!. Overall it's monotonous tapping and swiping as Thor moves forward automatically. The only reason it's in the platformer category is that the game progresses through levels rather than endless. The boss battles are simply tapping, and the only real challenge is trying to tap the tons of energy orbs, but no challenge in completing levels. Local high scores and achievement. Looks great, sounds great, controls great, but gameplay is lacking substantially. It's not necessarily bad, there are just much better choices.

Ice Age: Dawn Of The Dinosaurs

Made by the developers of Toki Tori, it's very similar, but with an Ice Age tie in. Play as scrat instead of Toki Tori, and go for the nut. A nicely made game, but not as good as Toki Tori, or the games in the notable category.

Puzzle Platformer that is well built, just behind the stiff competition of the previous two categories. Tilt to move hoggy, and tap to shift gravity to collect all of the fruit in each level. Good, but not great.

V is for Vortex

Portal for the iPhone with a unique hand drawn style. Portal gameplay with the newest update bringing on screen controls, and more levels. If you like Portal this is the game to get. Sits behind the other games in this category though.

Similar idea to the classic game Shift, but with updated graphics. Shift the playfield to reach other parts of the level. Good idea, nicely executed, and upgrades shift nicely. Though it doesn't compare to the games ranked above.

Imagine Toy Bot from iPhone platformer fame, but now just in small puzzle levels rather than extensive platforming levels. Then you have mini missions, which is another quality title from IUGO. Too simplistic in comparison to IUGO's spy bot and toy bot as well as the games in this category.

A port of the classic game, using the iPhone's tap interface. Shift the level around to reach different parts with all of the black and white goodness. Flipt passed it, by building on the original idea. The game doesn't introduce much difference from the flash version leaving the game just decent.

From the makers of Archibald's Adventures. Collect gems in ancient ruins in this puzzle platformer that isn't as good as archibald.

Tries to be like Sway, but isn't. The controls are a little too difficult, as is the level design. It can be fun, but its frustrating too, so it's just above the beyond category.

Roll through and paint the town. It's like the Wii game of the same name. The iPhone version though is quite repetitive as every level feels exactly the same without the challenges of the console version that is set in 3D. Nice and colorful, with some fun, but not enough to be recommended.