The best shooter game for the iPhone. It's a 3D first person shooter with a campaign which is pretty rare in the App Store. The campaign/story mode is what sets this game apart. You will spend hours with this game just in single player, and then a nice multiplayer is included as well. The game looks amazing, and the gameplay is console quality. The controls don't work perfectly but thats the same problem for every FPS on the iPhone. N.O.V.A. is one of the best games overall as well, so if you want a shooter look no further. 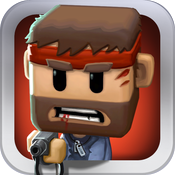 3D dual stick third person survival shooter with wonderful cartoon artwork and character design. Waves and waves of furries are coming after you, and it's up to John Gore to blast them away. After quite a few updates the game now has multiple unlockable characters as well as a boss battle. Maybe the most fun of any shooter, and definitely a nice change of pace to the seriousness of an FPS. Easy pick up and play controls, packed with fun, and great production values, minigore is not to be missed. Falls short in comparison to N.O.V.A.'s deluxe offering.

If you want online multiplayer deathmatches nothing even comes close to Eliminate. Ngmoco's first person shooter allows for super quick connects anytime anywhere with any type of connection. A great ranking and leveling system is included incorporating the Plus+ network. The controls are good, but still in the same position as all FPS' on the iPhone as just not quite there. Every match is fun, and engaging with maps set up for constant action. It's Free too, and the only concern is the pay system for credits. At free you get three death matches per day which has been great. For online multiplyer either globally or locally Eliminate is the choice. Doesn't compare to the deluxe campaign mode found in N.O.V.A. so it's ranked lower.

Inkvaders is easily the best side scrolling shooter for the iPhone. Two gameplay modes are included with survival mode, and 30 levels in campaign mode and three difficulty levels each. A lot of weapon variation as well as enemy variation. Online high scores are included, and some of the finest 2D graphics seen anywhere. Inkvaders is an extremely fun shooter that sits just behind N.O.V.A., minigore, and Eliminate, and is still great enough to be essential.

Alive 4 Ever is a really good dual stick shooter, and nearly on the same level as Minigore. It's completely different than minigore, and is more like Left 4 Dead. It's the best zombie shooting game in the App Store, and is a 2D top down shooter. What really makes this game great is the variability in missions rather than just simple survival. Thirty missions are included giving you various objectives, and each one is ranked adding potential replayability. Also there are RPG like elements in developing your character which is relatively unseen in the shooter category. Many weapons, and even wifi multiplayer in a recent update. A great game that is just the slightest behind the essential category.

One of the first zombie games in the App Store, and has withstood the test of time well. It's a 2D side scrolling survival shooter. Great character design is included as well as zombie killing animations. Many weapon types are included as well. Overall a really fun shooter that is just a bit behind Inkvaders with only a survival mode. Note that an update has been submitted to Apple that will provide seven different playable characters and level selection to improve an already outstanding game.

A game style we've seen before that isn't represented on the iPhone. Sit in one position with waves of enemies converging on that point, and trying to survive as long a possible. A surprisingly enjoyable kill fest. What makes the game stand-out is the teddy bear style. Many various teddy bears are being blown to pieces with all types of weaponry. A nice addition are the boss battles. The gameplay is so much fun, and then the entire experience is heightened by the story. There are tons of cut scenes that are absolutely hilarious. On top of the story mode there are two additional gameplay modes, and OpenFeint to keep you coming back. One of the most enjoyable 3D shooters in the App Store.

Gameloft's first full featured campaign FPS for the the iPhone. Modern Combat has a realistic theme in the middle east compared to the space theme of N.O.V.A. Very similar to N.O.V.A. with production values in gameplay. As a whole though it comes up a little shorter in every department, and the couple months difference in development between the two shows the difference. A good campaign FPS especially if your looking for a more realistic feel. Recent update also provided online multiplayer though it's even less than the ok offering in N.O.V.A. Not the best, and there are better shooter options available.

Third person dual stick shooter from Namco that is very reminiscent of iDracula. The main difference is that there is a story mode, and not just simple survival. The weapons and enemies are similar as is the look of the game. A good dual stick shooter, but there are a couple better options.

The first major dual stick shooter on the iPhone which brought about the now wide use of the control scheme. iDracula is a 3D survival shooter with multiple survival gameplay modes. Has a Van Helsing type theme as you battle waves of werewolves, skeletons, demons, spirits, and all kinds of monsters. Many weapon types are included, and even after all these months it's still a great iPhone shooter. The production values are also still top notch. Has been passed by the likes on Minigore and Alive 4 Ever, so look at those two first, but there's no doubt iDracula is a great shooter to consider.

A really top notch tap to shoot game that doesn't necessarily compare with the other games listed, but is the best tap to shoot game by far. Recent updates have made this game a real stand out. There is survival and campaign mode as well as level select to give you a lot of variability and boss battles. A nice feature is that you tilt so your sheep avoids damage while shooting the drop down zombies, and other enemies. If your looking for a tap to shoot game this is the best, though it doesn't compare with FPS or dual stick shooters that are even ranked below.

Disappointing title that isn't worth the premium $9.99 price tag. Billed as a gore fest, and instead you get a bore fest. Hardly any action included with many breaks in the gameplay. No doubt it has great production values. A new in app purchase provides a new map that's another $4.99 bringing the total to $15 when there are better options above for much cheaper. Though it's a great port of the console version, it still is relatively basic for an iPhone shooter. Includes a unique co-op multiplayer that is definitely good when it works, and when there is actually action on screen. Three controls with only one that works well enough to survive. The tilt controls are good, but like other FPS' there is still no great FPS iPhone controls. A good shooter, but not worth the price of admission It's the best 3D FPS zombie shooter on the iPhone, but that is such a narrow classification that it isn't saying much. There is better value to be found above. 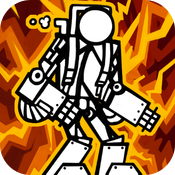 A very deluxe shooter with a stick figure style. Lots of action, and even RPG leveling components. Tons of weapons are included as well. Surprisingly more deep than it looks on the surface. The controls are a little weird, and take quite awhile to get used to. Overall the sequel to cartoon wars is really good, making this notable, but not quite as good as the several games listed above.

A big name title that doesn't live up to expectations. Has the metal gear solid name, but none of the game attributes. It's basically a tap to shoot game as your always in foreground, and shot at varying enemies in the background. Much too basic to compete with the better shooters. Currently on sale for $0.99 which makes it a lot more appealing than the launch price of $7.99

A game that is based on Cannon Fodder where you control a pack of grunts by holding your finger on screen, and the grunts will follow. A well made game with variability in objectives. Has nice visuals and sound effects as well as some amusing one liners. Not the greatest of games, but definitely good, and worth taking a look at it you're into a change of pace kind of shooting experience on the iPhone. Doesn't compare to the big boys in the category.

Brothers In Arms® Hour of Heroes

The first major shooter game for the iPhone that offers a third person shooting experience. Has been surpassed in many ways after so many months, but still a solid shooter for the iPhone. At the time great, but now has lackluster controls and visuals. The gameplay is still god though. Doesn't compete with the games that have came after.

Another big name game that doesn't live up to it on the iPhone. It's an on rails shooter since it seems the developers could figure out movement controls like the other FPS's in the App Store. Leaves it rather low in action, variability, and doesn't engage the player. Tilt to aim is well done, but with no movement, and no fun this game isn't recommended.

The best sniper game on the iPhone, but that doesn't say much especially when comparing to the category as a whole. If you want an iPhone sniper experience looks no further, but if you want an iPhone shooter this one shouldn't even be considered. Too repetitive of gameplay, and not nearly enough action. Even the controls aren't as good as they could be with tilting to aim not perfect.

Christmas themed game from the maker of Inkvaders. Blast away elves trying to steal presents with all kinds of weapons. You play as either Santa or Rudolph, and there are online high scores and achievements. If you're looking for a christmas themed shooter, there's no better. Doesn't really compare to the bigger titles in this list in terms of depth. Does match in production quality, and fun though.

SILENT HILL The Escape (US) 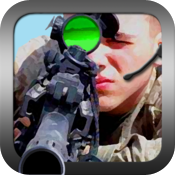 by Pick Up And Play 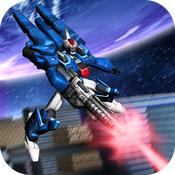 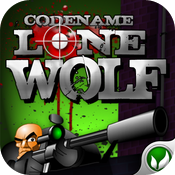 by Rake in Grass